Homage to a Goan Artist

As part of the ongoing Raza Centenary celebrations organised by The Raza Foundation, New Delhi, to commemorate S H Raza and his artist friends in the Progressive Artists’ Group, Bombay, Posthumous Dialogues with F N Souza, an exhibition of contemporary art to honour the legacy of the great Modernist Indian artist F N  Souza, opened at the Museum of Goa, Pilerne, Goa, on 23rd April 2022.

This exhibition, with both established and upcoming artists, curated by writer and critic Sabitha Satchi, aims to showcase the artistic legacy of Souza’s bold, brutal and often distorted figures, his innovative forms in contemporary art, and its significance in a world radically altered by a global pandemic and rising suffering and sectarian violence.

The relevance of Souza, who is a Catholic born in Saligao, Goa, India, and a black immigrant in the West, whose works intensely engaged with brutality and suffering in content; the irregular in form; and the distorted human figure in powerful lines and colours, cannot be emphasised enough in our world radically altered by a global pandemic and rising sectarian violence.

The following are some of the works displayed at the exhibition with notes by Sabitha Satchi:

Atul Dodiya’s three works here are from a series that he has been doing since the beginning of the pandemic. These works, in a style and in colours that reference the early twentieth century painter Carlo Carrá, have elongated human figures in action. These paintings have an intermixed sense of both contemplative stillness and of quiet movement. Dodiya’s figures inhabit an earth-toned landscape, and evoke a feeling of solace in healing nature.

Pradeep Naik’s work combines several elements in a single harmonious pictorial frame. There is the landscape burning in war after a bombing, there is a grey sky-like patch that overhangs it, there is the image of industrial pollution, and a Souzaesque line-drawing. Naik masterfully composes these elements in tension with each other as well as in singular harmony of colour and form. This work speaks of our times – of war, climate change, disease, and violence. Yet there is human love and merciful nature in a sky laden with rainclouds. 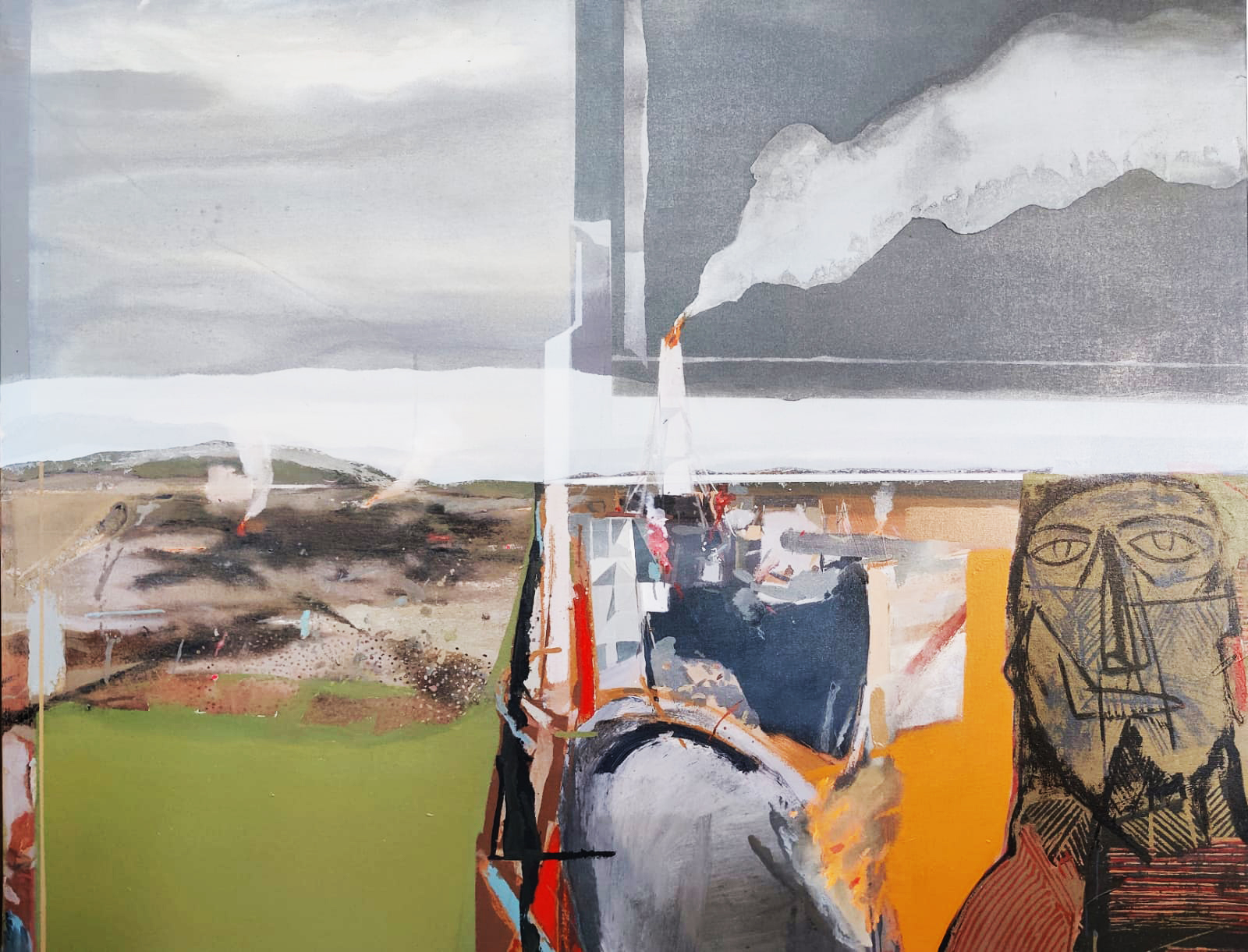 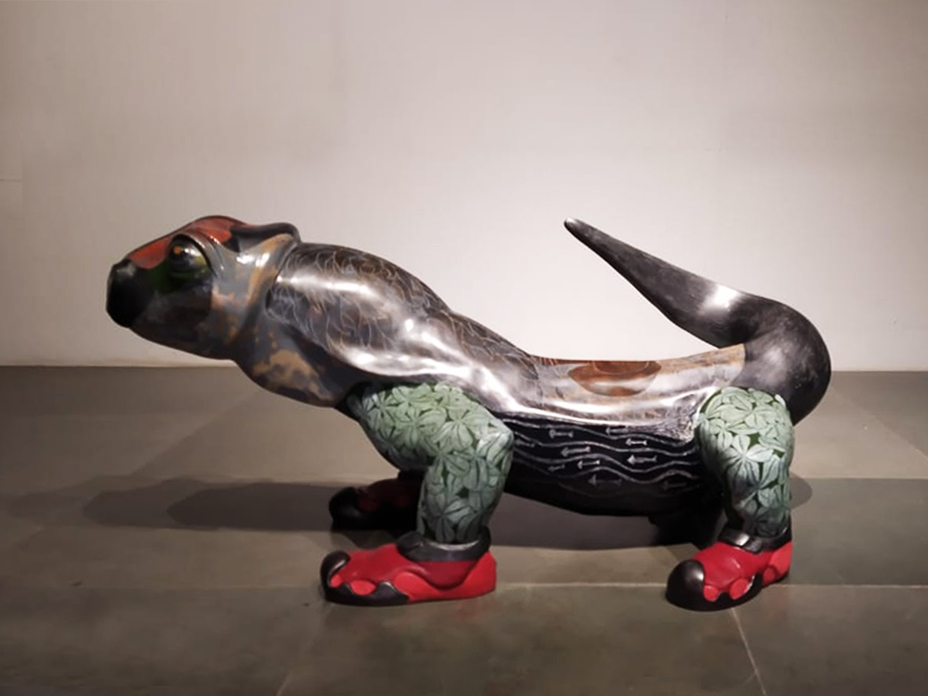 Siji Krishnan’s portraits in watercolour explore radically new ways of engaging with the human figure. Her colour palette is faint earthy tones, almost suggesting a fading away, an impending absence that is lurking behind. Some of her male figures have prominent nipples, suggesting the inherent androgynous nature of the human, particularly of a paternal figure, radically altering a realist representation of the figure. Her works consistently engage with and interrogate gender categories and the idea of the family.

Siji Krishnan says of her own art, “I am fascinated by the idea of portraits — of people, other living beings and nature — delving into the inner depths of their personalities, inviting them to saturate my senses. They are mostly unclear images and are perceived by me in abstraction though they do have a figurative structure. I aim to capture the presence of all the qualities I sense, using colour with restrained detailing, for an unchecked flow of consciousness. I am realizing that it is essential to move beyond physical boundaries. This will also help me to better understand the processes of my mind.”

From 2006-07 onwards Patwardhan’s art has had a constant engagement with street violence. The artist says that by 2012-13, when these works were created, political violence was no longer just lurking below the surface of the “normal”, but had become an eruption into everyday life, a new “normal”. Over the last two decades Patwardhan has studied images of bodies in violence in Renaissance Art, in Goya’s works, as well as in Mughal miniature – such as the images of war in the paintings in the Mughal manuscript of the Persian translation of The Mahabharata.

The mutilated and brutalised human figure has been a sustained aesthetic meditation for Patwardhan. In ‘Unclaimed Bodies’ 1, 2 & 3, we see three inert figures one below the other, like in a narrow coffin, and arranged like the drawers of cadavers in a morgue. The work has a reference to Hans Holbein’s ‘The Body of the Dead Christ in the Tomb’. The narrowness of the frame constricts the figure inside, and the colours used in acrylic are stark: black and white. The artist constricts himself inside self-imposed limitations of chromatic possibilities, identifying with the subject of the painting. 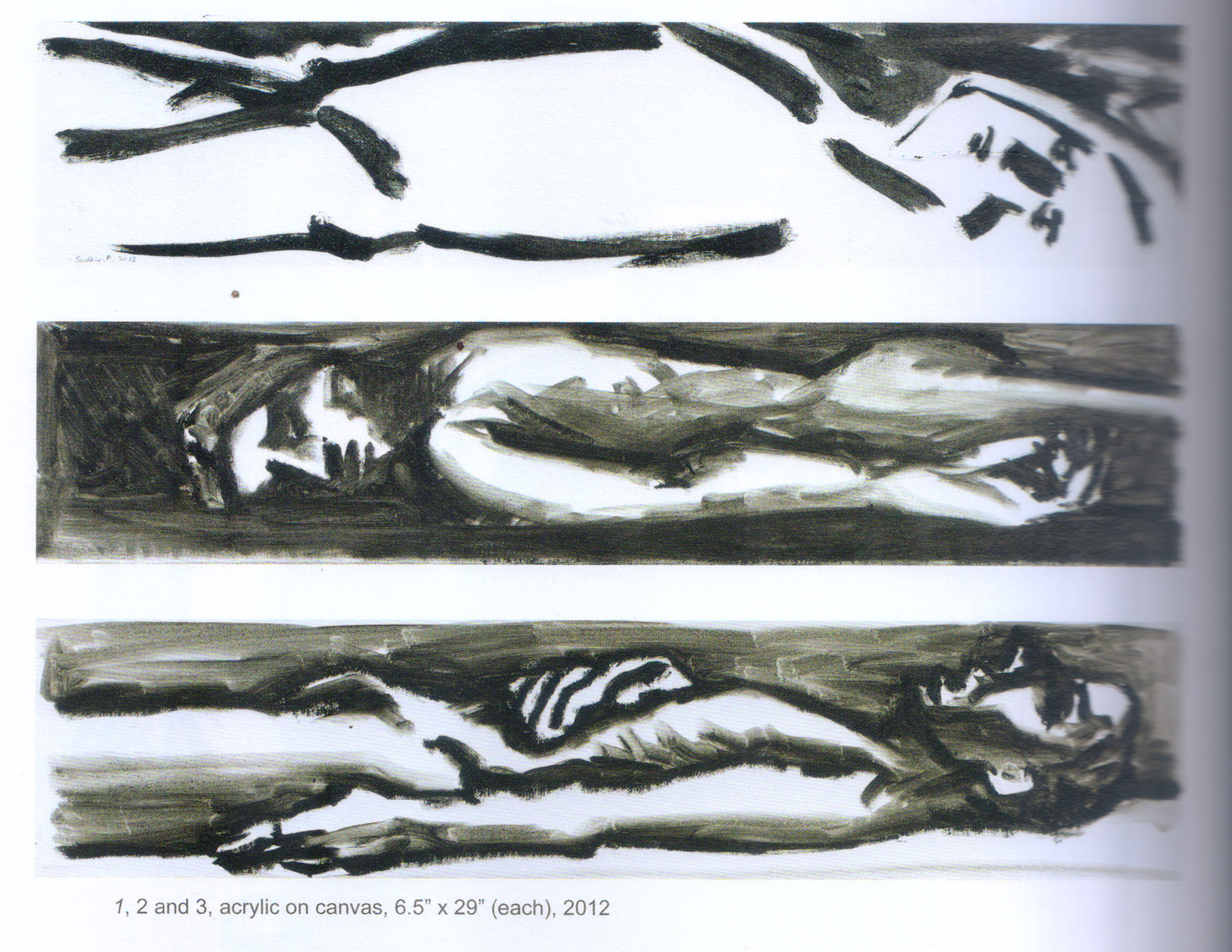 Subodh Kerkar has been engaged in a close study of F N Souza’s art and creating works inspired by Souza continually over the last two years. Kerkar’s innovation lies in the use of the medium of clay, and the materials he uses to create texture. And yet there are lines of figures drawn on clay in a fluid hand. In this set of three sculptures of a head with different faces on either side, Subodh Kerkar has given different treatments to the surface of the same form, referencing his own as well as Souza’s compulsive artistic processes. The sculpture is profoundly Souzaesque and to see the textured double-faced head, the viewer has to walk around it, thus inviting her to the movement of a pradakshina.

Subodh Kerkar says: “Souza never did a sculpture. This work is a sculpture of a head with faces on either side, both Souzaesque. These are extension of my works on clay hundreds of which I have drawn, where I used cycle tyres and other materials for texture on clay. What’s interesting for me are the teeth in Souza’s portraits. Dentures are most significant in Souza’s drawings – he distorts the mouth and gives new shapes to the mouth and teeth. When doing clay, to bring out the texture of the dentures,  I used the impression of tyres. I am secretly happy that Souza would have been pleased with what I have done in homage to his legacy.”

All images courtesy Museum of Goa.

Musuem of Goa is a contemporary arts institution founded in 2015 by artist Subodh Kerkar and has been running events such as exhibitions, lectures and dialogues, apart from initiatives to support local craftspersons.

Sabitha Satchi is a poet, writer and art curator. Her essays on literature, art, and cultural theory have been published in several anthologies and journals.