When an Instrument Seeks You 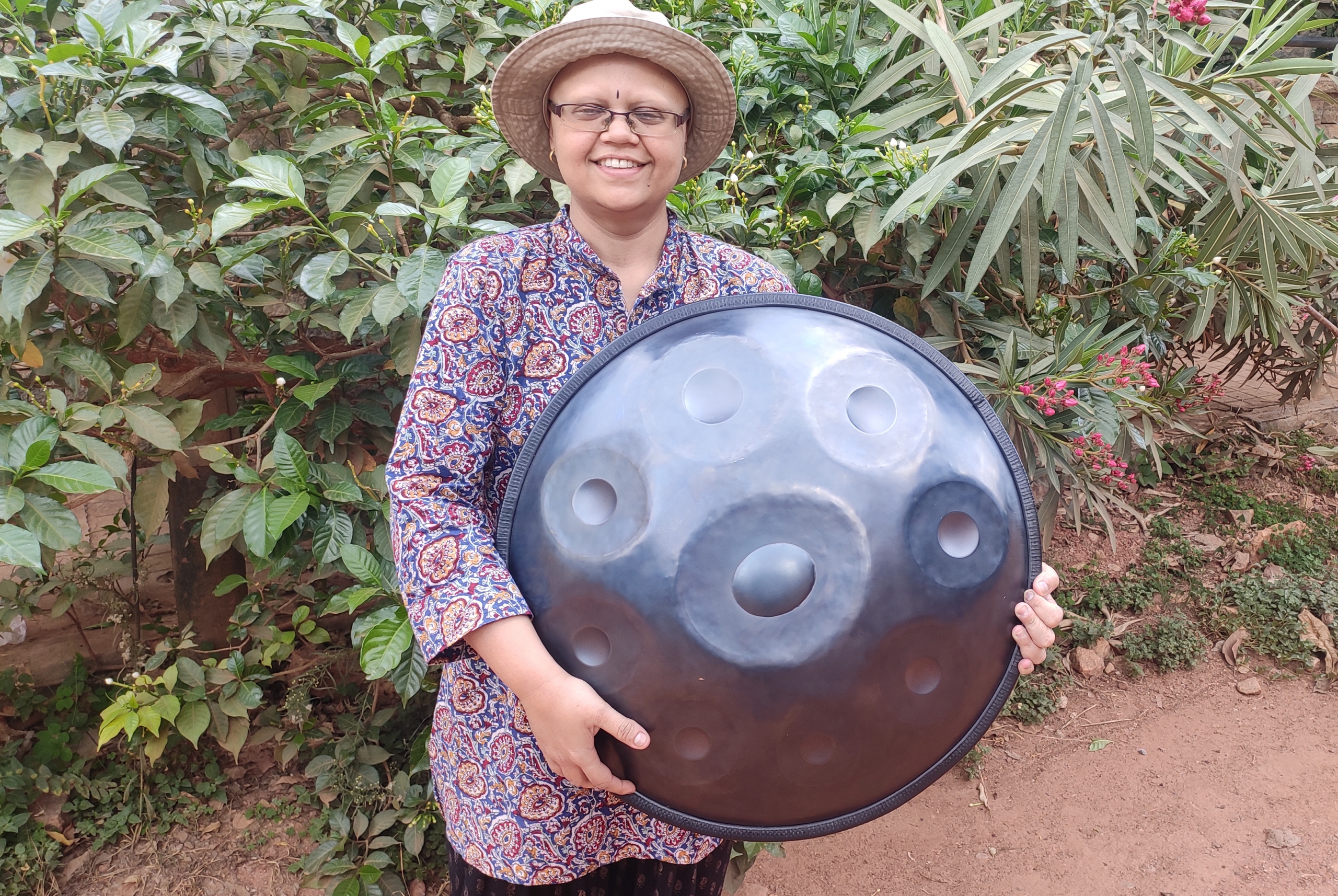 It was sometime in 2008. Appa and I were at a concert in Bangalore, performed by musicians from Trinidad and Tobago. In the middle of the concert, an artist brought a large steelpan onto the stage, introduced the audience to this curious instrument (most people in the audience were seeing and hearing it for the first time), and played a brilliant musical piece on it. On our way back, the sound of the steelpan still dancing in our ears, Appa said, ‘We should try and get a pan.’

Cut to 2012. I had forgotten about the steel pan until I happened to watch a video on Facebook. My friend had tagged me on one of the handpan videos that had been doing the rounds. I remember – I heard it once and I could not stop. One video led to the other and I found myself watching handpan videos on YouTube for hours on end. There was something deeply mystical and profound about it; just like my ghatam.

In 2013, during the Frame Drum Festival in Freiburg, Germany, I saw the instrument up close for the first time at a drummer’s house where we were rehearsing. A small handpan with a burnt copper finish was lying on a cushion in a corner of the room. I had felt its presence throughout the rehearsals and I longed to run my fingers over the instrument which was so near, yet so far! But we had to rush after the rehearsals. I rued my bad luck but convinced myself that I would soon find another pan to play on. Little did I know that this would be a long seeking.

Friends who knew of my search for the handpan began sending me more and more videos. Some of them who were travelling in Europe would often take videos of buskers playing the pan on the streets only to send it to me. I began reaching out to musician friends in India and Europe to see how I could procure one. While none of my friends in India had ever seen a pan except in videos, in Europe, many of them had seen the instrument or knew friends who played it. But there were still no leads on how I could get one.

Amidst all this, I discovered a beautiful connection between my ghatam and the handpan. In the late 1990s, Reto Weber, a hand percussionist, met Sabina Schärer and Felix Rohner of the PAN Art Hangbau AG in Bern, Switzerland. Felix and Sabina had been building steelpans since 1976. Reto had come to them with the idea of changing a steel pan into a ‘sounding pot in steel with some notes to play with the hands.’ He was looking to blend the sound of the ghatam with that of the steelpan. And that’s how the first Hang drum (Hang is a Bernese German word for Hand) came into being. A detailed history of the Handpan is available here.

My search continued. Joao Sousa, my friend in Portugal who makes exclusive clay musical instruments wrote to inform me that he had started crafting handpans. With great excitement, we did the costing for the making and shipping of the pan to India only to realise that I would not be able to afford it. I was disappointed but I pulled myself together once more and resumed my search. The following week, another friend told me that a Russian made handpan might be available in Bangalore in a few days. I contacted the store that was procuring the pan but to my dismay, I was told that the store won’t be able to get it as the pan got stuck at customs in Mumbai.

I went to London in June 2017. On the very day that I landed, I saw a pan player busking in Covent Garden. This had to be an auspicious sign. Perhaps a pan was not so far from reach this time. I called Appa and said that I might be coming home with a pan this time. For four days, I made online searches and calls to music shops without any luck. I only had a couple of days left in London now. Disheartened, I got on a bus one evening with no particular destination in mind. A woman sitting next to me started a conversation and within a couple of minutes we were talking about music shops. ‘Maybe you should go to Footes or Hobgoblin Music. You will have to get off at the next stop,’ she said. My eyes glittered with hope. I thanked her and I jumped out at the next stop.

But how was I to navigate my way without internet or GPS? Unlike in India where people enthusiastically advise you on ten different ways to reach a certain point, I found no help on that cold rainy evening in London. I did manage to find Footes but the store was closed. After two hours of walking in the vicinity, I spotted Hobgoblin Music at the corner of a street.

Tired yet relieved by the sudden discovery, I stepped into the store and said, ‘I am looking for a handpan. Can you help me please?’ Paul Gardner, the shop manager who was at the counter, raised his eyebrows and greeted me a large warm smile. ‘Not a handpan. But I can show you this.’ He handed me a small, bright red tongue drum. ‘Try this,’ he said. My jaw dropped when I saw that the drum had an Indian brand name. ‘How come? Can you tell me who makes this brand in India?’, I asked. Paul said, ‘I don’t know the Indian company. We source it from a seller in Europe.’ My heart sank again. I shared with Paul all about my search for a pan and he assured me that the universe will help me find one. Paul is a stand-up comedian, a writer, and a musician himself. We jammed a little and spoke about bagpipes and percussion in Carnatic music. As I was taking his leave, he said, ‘I have a surprise for you.’ He promised to email me the cover page of a ghatam text book written in Tamil, possibly in the 1960s or 1970s. ‘Clearly the book is out of print and might not be available even in India,’ he said. Within a few hours, the email was in my inbox.

Back home, I looked for the contact details of the Indian brand tongue drum. A website link said that the company selling it was based in the Czech Republic. I called the Czech number and they said that a music shop in Mumbai makes these drums for them. I called the Mumbai shop. They seemed to have been guarding a secret and slowly they began evading my calls. Soon I realised that the company made all their sales outside the country. From Mumbai, my search took me to Rishikesh, Gokarna, Auroville – all dead ends!

Sometime in early 2018, Daniel Waples, one of the best known Handpan players, was performing in Bangalore. My colleague Shubham Roy Choudhury, who was well familiar with my search for a pan, insisted that we go for this show. This was the first time ever that I listened to the pan live. I couldn’t speak with Daniel but Shubham directed me to Chirag, the person who played with Daniel that night. After the concert, I reached out to Chirag and his wife Priya and we exchanged numbers. A few days later when I called Chirag, he said that he had started making his own line of handpans and wanted to show me a prototype. We soon met at a café and, for the first time, I held a pan in my lap. It was a dream come true. Seven months later, following many conversations about the kind of pan and the scale I wanted, my pan began to take shape at Chirag’s Chirp Studios in Bangalore. And in what I see as the most beautiful moment of my life, Chirag and Priya came home and delivered my pan in August 2018, on my birthday. My journey had comea full circle. Like the boy in Coelho’s The Alchemist, I had found my treasure right at the place from where I had begun my search. Today, I am a part of the growing handpan community in India – a vibrant, passionate and generous community of makers and players.

Appa had left us when I finally got my pan. And in the next few months that Amma was with us, the pan had become her greatest comfort. I would play the pan for her till deep into the night, allowing its sounds to caress her and drift her into sleep.

As a traveler, I have always known that it is the journey that gives meaning to the destination. Sometime in the middle of this journey on one occasion when I was feeling low, Appa had said, ‘You will have to wait my dear. Maybe the pan is also seeking you.’

Sumana Chandrashekar is a carnatic vocalist and ghatam player. She has studied vocal music and the ghatam under Vidushi Rupa Sridhar and Vidushi Sukkanya Ramgopal. She currently works as Programme Lead at India Foundation for the Arts.