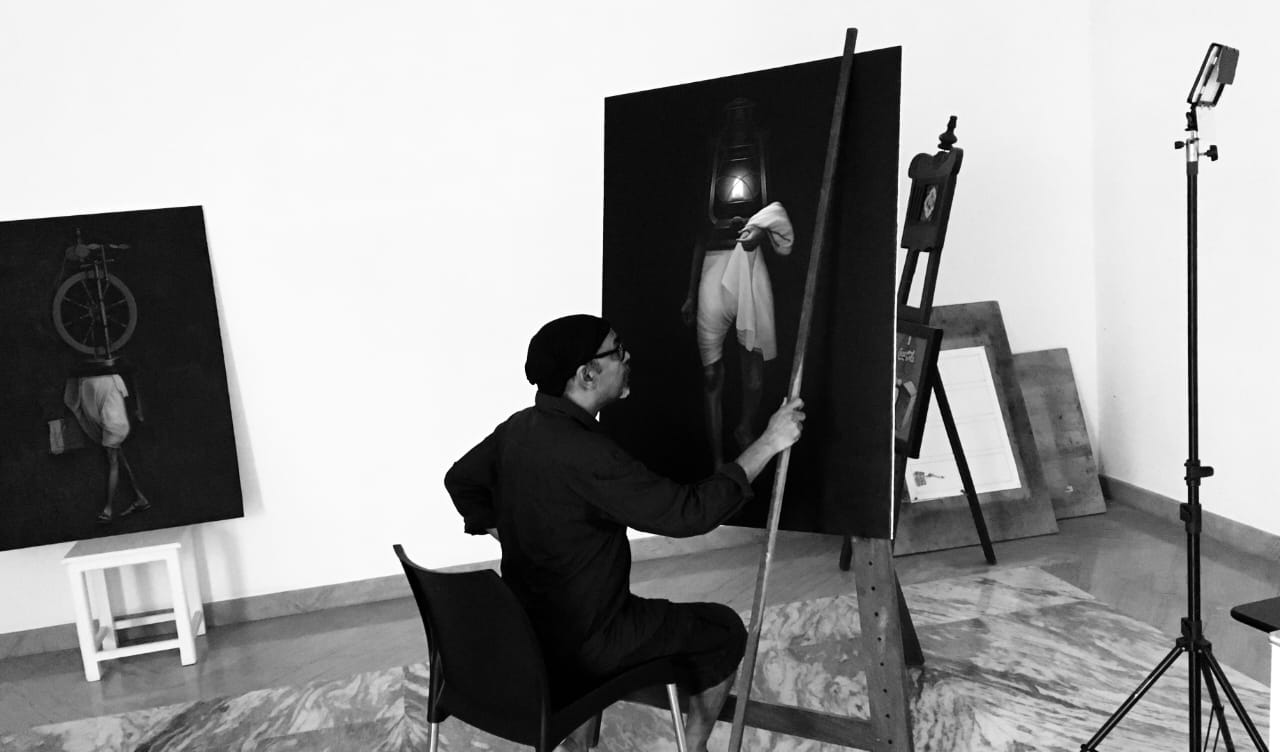 Self­‐Imposed Isolation in the Studio

The heat kept getting more and more intense. The coronavirus had arrived in Kerala and was multiplying.

Nothing is lucid in the early morning light. All I can see is my studio in low light in the semi­‐dark. Here there is a little coolness, books, ink, pigments, and pens. Here wait Ozu and Bresson and Tarkovsky to share visual stories. The best time in the studio is between four and seven in the morning.

As Paul Klee said, the time when lines can be taken for a walk.

As sunlight filled the studio, a drawing had been done.

Exhibitions in galleries have gone still; who will see the drawings?

After taking an image of the drawing, I sent it to my most intimate friends by Whatsapp – KGS, Sanil, Bose, Sabitha, Satchidanandan.

The next morning when I got up to start drawing, there were replies to the Whatsapp messages. From Sabitha, poet and curator, it was in the form of a poem: ‘Artist’s Fingers.’

The Lamp and Five Loaves of Bread.

More poems from Sabitha in reply to each drawing, and more yet to come…

Outside the studio I can see the first summer rain through the window.

When men and women withdraw into their houses in fear of viruses, the inheritors of the earth who come in search can be heard humming— like the background score in a motion­‐picture. 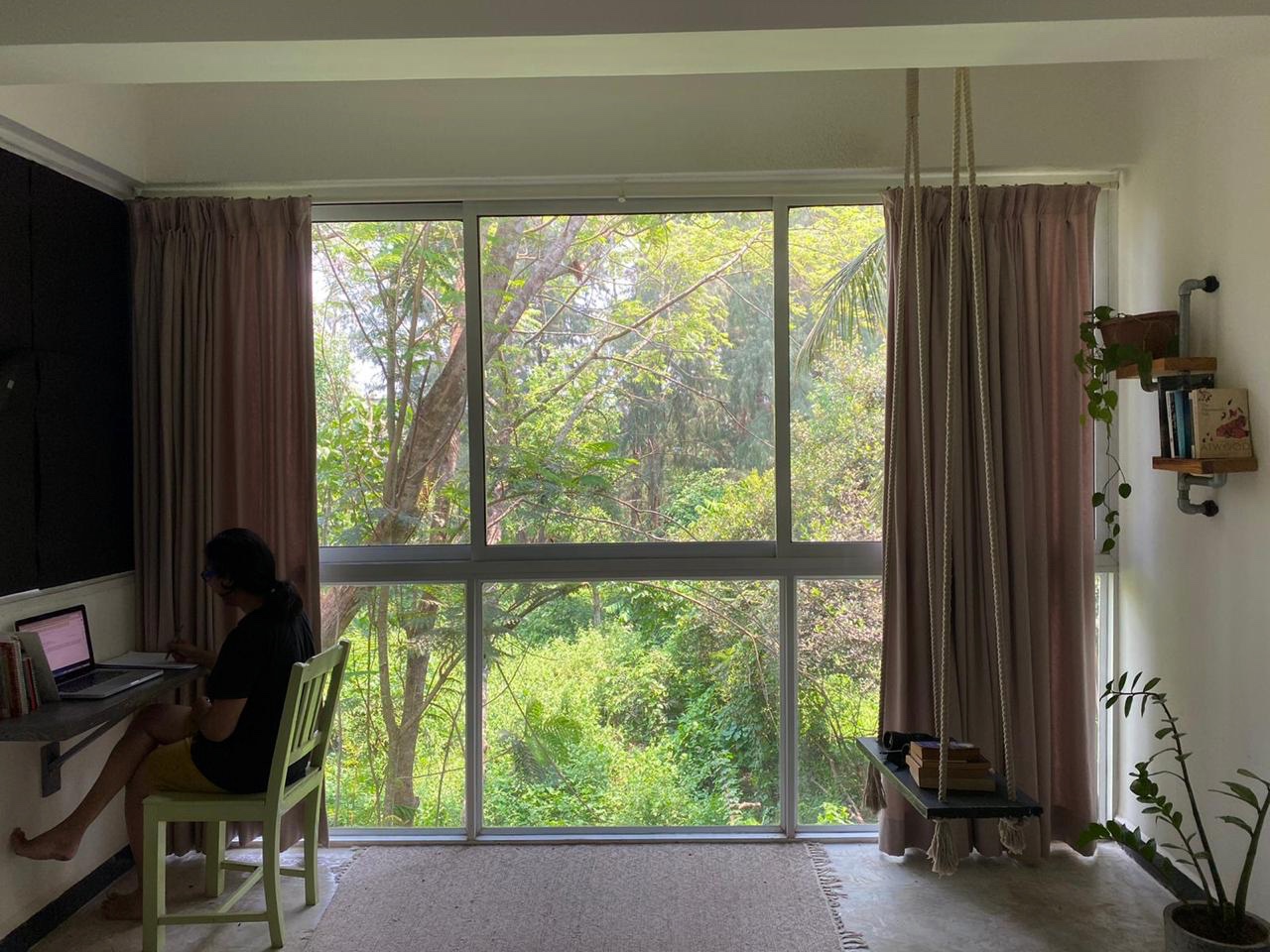 There is a sense of urgency about these times. One feels one is living on the edge of a precipice. The world is restless, there is untold suffering of millions of people living precarious lives.

Even while being locked down in the writer’s studio I came to stay in only for ten days in Goa on curation work, the photographs from Delhi reach me—of labourers on the Yamuna river bed foraging amongst rotten bananas; of workers walking home hundreds of miles so that they can then safely “Stay Home” as the PM urged the privileged classes; of Muslims being cruelly hated upon, attacked and denied rations.

There were images too of Cuban doctors travelling thousands of miles to attend to the Covid­‐19 crisis in Iran and Syria; of gallons of milk being poured down the drain in the U.S. even as it records millions of people newly registering as unemployed.

In such an unequal and restless world where everyone is just fighting for survival, how does the writer in her studio in isolation, far away from home and her beloved books, respond to the crisis?

It is in these circumstances that Madhusudhanan, artist and friend of over two decades, sends me a drawing from his self­‐isolation in his studio in Kerala. More drawings come. There is restlessness in the drawings, as there is a longing for home; there is the pain of the exiled and the abandoned. And there are references to other contexts of exile and abandonment—Paul Celan’s poetry and Charles Baudelaire’s lines; there is Paul Klee’s Angelus Novus spreading its wings; there is the sound of the nail being driven into the cross.

There are also lamps and bread and shoots of green. There are tents of refuge. There is the precarious boat of the refugee. Behind us both stands Anna Akhmatova in a line for bread; in front of us are Tarkovsky and Ritwik Ghatak and FN Souza. Leonard Cohen sings of the dark in grainy lament somewhere.

The poems kept coming, one in response to each drawing and to a common vision and time. We each planted seeds in our studios and there were birds and squirrels in the forest my windows overlook.

In this temporary home, in the absence of the companionship of my books, I found solace in the trees, the birds, the clear starry sky, and the artist’s lines that responded to the restlessness in the world with their luminiscent fluidity.

There was fire and earth and water. There were angels in the sky and fallen angels on earth. A project was born—Exodus. 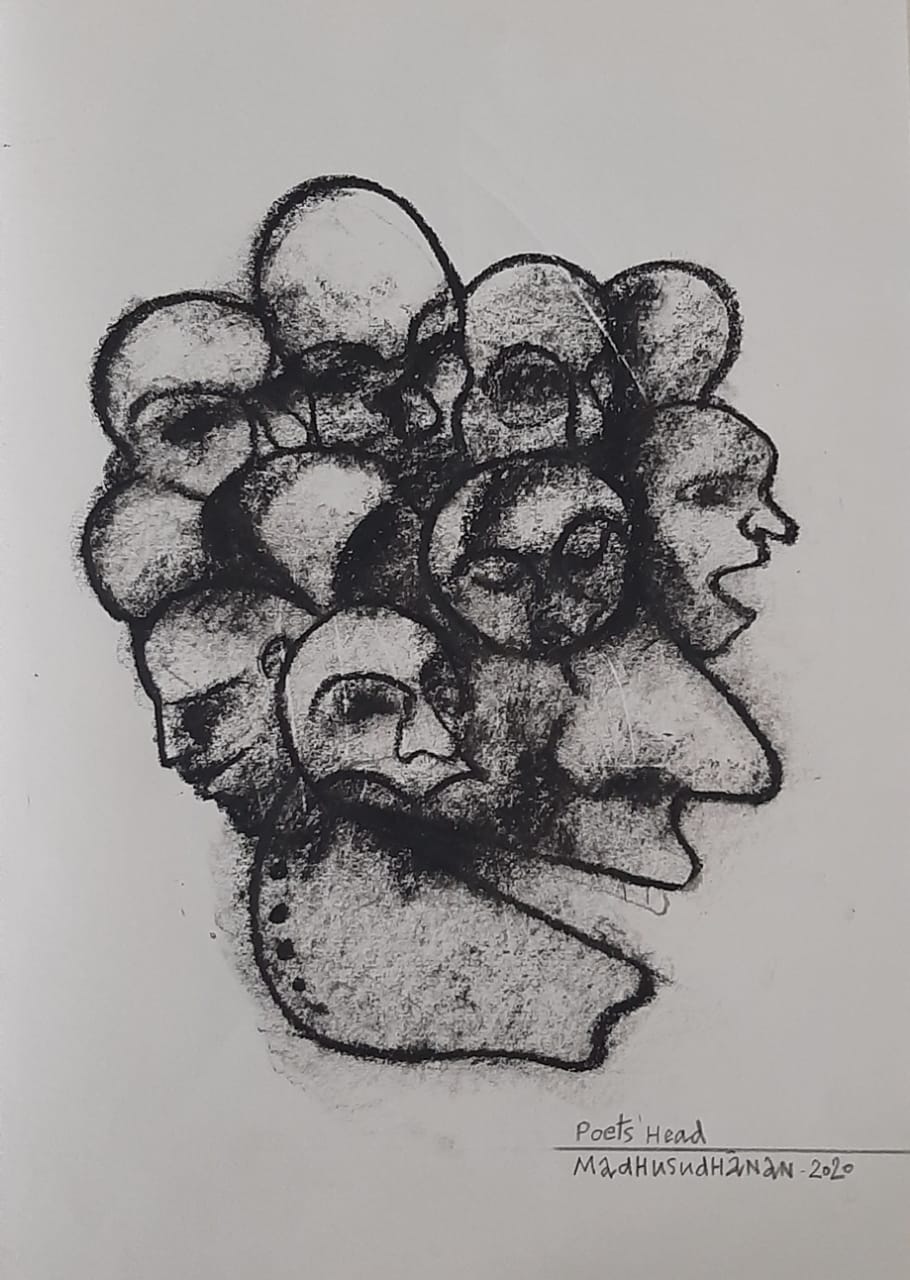 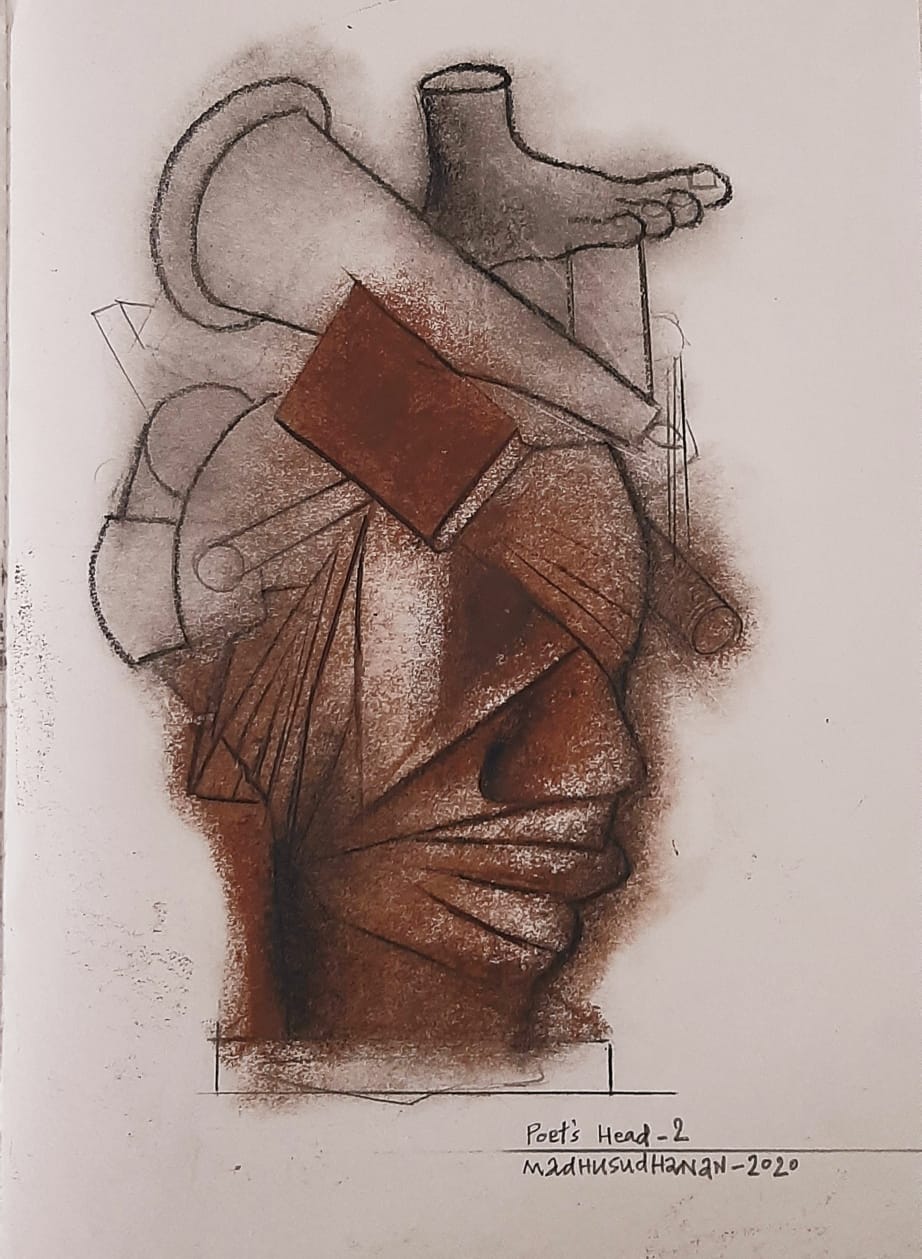 Dragon fly­‐wings darken the sky and the swell
breaks the banks and rushes into walls and doors
In his sky­‐studio the metal smith sculpts a church­‐bell
Thunder beats its frenzied drums, everything sways
and fragments of idols cover the altar of earth’s floor
and confessionals quake with hollow men’s ways

Your finger lit up and flickered, a lighthouse
shone forth amidst roiling butterfly wings
The ship’s shadow comes ashore, near near—
They’re coming in search of home, the refugees. 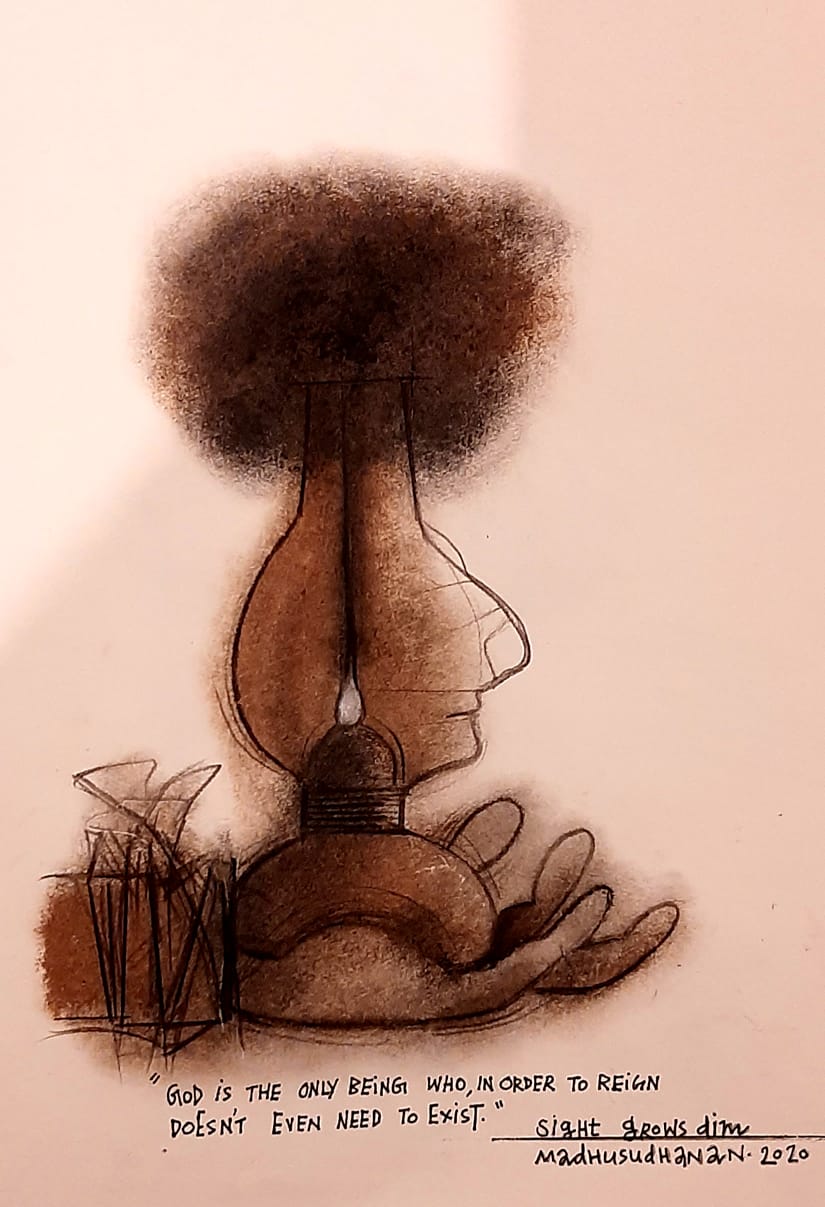 The Lamp and Five Loaves of Bread
Sabitha Satchi

Mottled smoke hangs over the lamp and forest­‐
green turns sepia as they scatter on the sky, birds,
birds, looking to nest, everywhere they wander:
the abandoned, the homeless, migrating words
fly off looking for a palm leaf on the empty sea
The boat is unmoored in the sky for two fish
The farmer sows his last sack of seeds and awaits

a miracle, a leaf shoots up, the wick­‐finger rises
up and sings a grainy Hallelujah, the neighbour
strums litanies on the door and on the holy page—
five loaves of bread arise in evensong 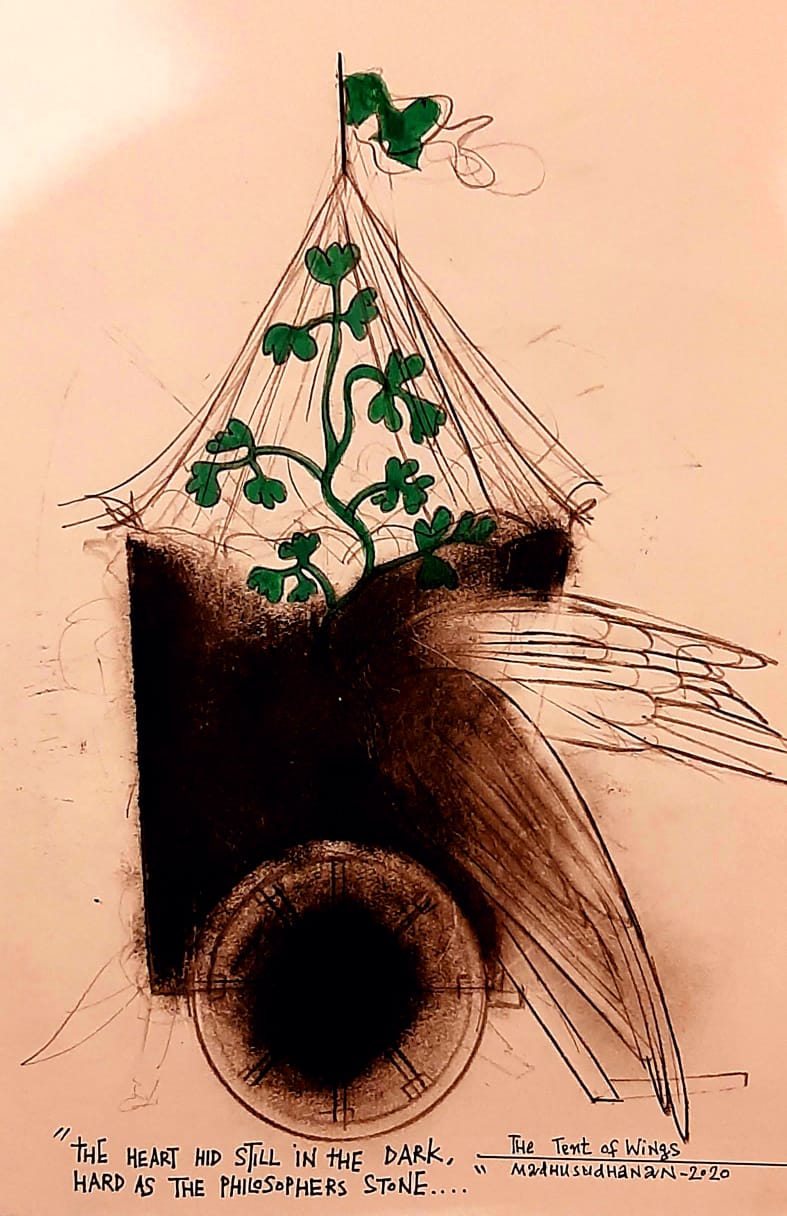 The Tent of Wings
Sabitha Satchi

As the tents, tents in the open multiply
an eagle overhead surveys the huddled
baking bread on open fires, drying the sky
on the clothesline, hanging the curtain
to dry behind the stage, shadows move
in the motion­‐picture, now still, now darting
to the frenzied beat of chenda drums

They cover their ears, the ground trembles
and all are drenched in the thunder­‐clap
Wet is the sky, the fire, the earth – all are now water, a green tent shoots up—
wings of Mercy gather the dark, the fallen.

The carpenter hammers in a nail, brings
the twisted feet together, drip by drip
sees carpenter­‐blood drop in strings
Startled, he loosens the fourth nail ‘s grip
Sweat wets his brows, wet is the soil, wounds
spread on the wood in contagious rings

Thunder rolls, the parched earth opens her jaws
For a single drop of water He screams, the way
of the cross is exposed by blinding light—
Eli, Eli, lama sabachthani?

Madhusudhanan is a leading artist and film maker based in India. He is a founder-member of the Indian Radical Group of Painters and Sculptors. Born in Alappuzha, Kerala, Madhusudhanan studied Painting from the Fine Arts College, Thiruvananthapuram, Kerala, and Print Making at the Faculty of Fine Arts, MS University of Baroda. His artistic practice flows seamlessly across various mediums in art and cinema, including video art and narrative feature film. Madhusudhanan’s installation of 90 charcoal drawings titled The Logic of Disappearance – A Marx Archive has been shown at the Kochi Muziris Biennale: ‘Whorled Explorations’ 2014-15, curated by Jitish Kallat. His works have been exhbited in venues including the Venice Biennale 2015, Kiran Nadar Museum of Art, New Delhi, Vadehra Gallery, New Delhi and 1+1 Gallery, Dubai. As a filmmaker he has made films in English and Indian regional languages, as well as two silent short fictions. His feature film Bioscope won several awards including the NETPC Award for Best Asian Film, Osian, Special Jury Award at the National Awards and Kerala State Films Special Jury Award. Other notable films include Self Portrait (Short Fiction, Hindi, 2001) and History is a Silent Film (Short Fiction, Silent, 2006), which were recognised as Outstanding Films from International Festivals, by MoMA.

Sabitha Satchi is an art and literature critic, artcurator and poet. After teaching English literature at the University of Delhi for 12 years, she was a researcher in London for six years. She has been the recipent of awards including the Commonwealth Research Schoarship, U.K.; Paul Mellon Fellowship, Yale University, U.S.A.; Graduate Student Award, UCL, London; Sarai-CSDS Indiependent Fellowship, New Delhi; and the Vyloppilli  Sreerekha Award for Malayalam Poetry. Her poems in English and Malayalam have been published in several journals and anthologies. Her articles have appeared in journals and anthologies of literature, art, and the humanities; and she has presented papers at many conferences, including at Columbia University, New York; Warwick University, U.K., Leeds University U.K., the University of Oxford; CSDS, Delhi, and Goa University. She has been invited to read her poetry at venues including Poetry Africa, Durban, London House, London, Prakriti Poetry Festival Chennai, University of Srinagar, Kashmir, KLF, Kozhikode, and Pakistan-India People’s Forum for Democracy, Delhi. Her book of poems, Hereafter, is coming out from Poetrywala in May, 2020.