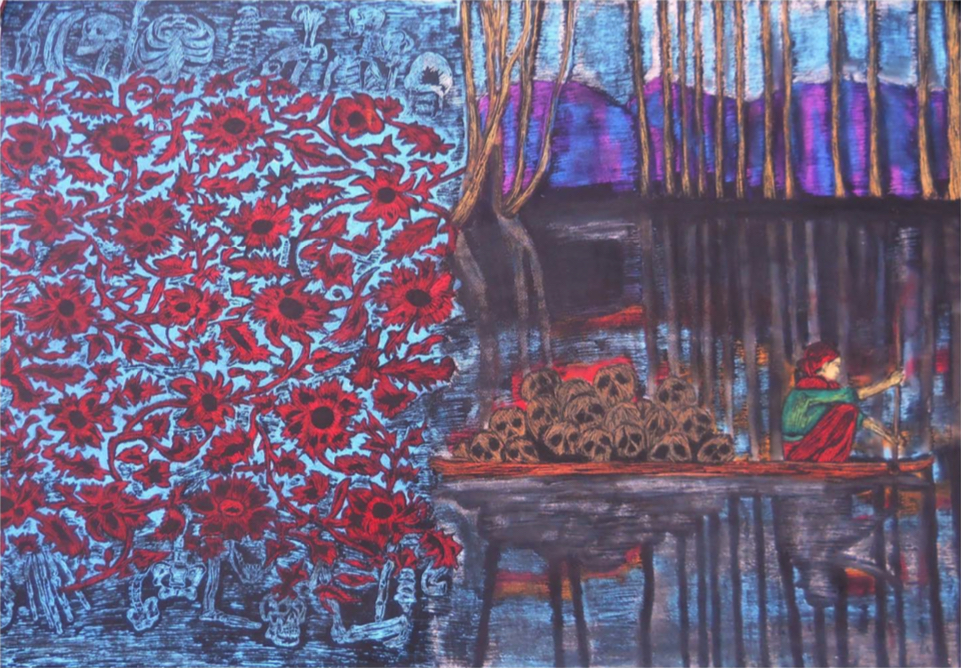 The Country Without a Post Office
Agha Shahid Ali

Again I’ve returned to this country

where a minaret has been entombed.

Someone soaks the wicks of clay lamps

in mustard oil, each night climbs its steps

to read messages scratched on planets.

in that archive for letters with doomed

addresses, each house buried or empty.

Empty? Because so many fled, ran away,

and became refugees there, in the plains,

where they must now will a final dewfall

to turn the mountains to glass. They’ll see

us through them—see us frantically bury

houses to save them from fire that, like a wall

caves in. The soldiers light it, hone the flames,

burn our world to sudden papier-mâché

inlaid with gold, then ash. When the muezzin

died, the city was robbed of every Call.

for burning. Now every night we bury

our houses—theirs, the ones left empty.

We are faithful. On their doors we hang wreaths.

More faithful each night fire again is a wall

and we look for the dark as it caves in.

“We’re inside the fire, looking for the dark,”

one card lying on the street says, “I want

to be he who pours blood. To soak your hands.

Or I’ll leave mine in the cold till the rain

is ink, and my fingers, at the edge of pain,

are seals all night to cancel the stamps.”

The mad guide! The lost speak like this. They haunt

a country when it is ash. Phantom heart,

pray he’s alive. I have returned in rain

to find him, to learn why he never wrote.

no nation named on them. Without a lamp

I look for him in houses buried, empty—

He may be alive, opening doors of smoke,

breathing in the dark his ash-refrain:

“Everything is finished, nothing remains.”

I must force silence to be a mirror

to see his voice again for directions.

Fire runs in waves. Should I cross that river?

Each post office is boarded up. Who will deliver

parchment cut in paisleys, my news to prisons?

Only silence can now trace my letters

to him. Or in a dead office the dark panes.

“The entire map of the lost will be candled.

I’m keeper of the minaret since the muezzin died.

against the light, sometimes white, then black.

The glutinous wash is wet on its back

as it blossoms into autumn’s final country—

Buy it, I issue it only once, at night.

In this dark rain, be faithful, Phantom heart,

this is your pain. Feel it. You must feel it.

“Nothing will remain, everything’s finished,”

I see his voice again: “This is a shrine

of words. You’ll find your letters to me. And mine

to you. Come soon and tear open these vanished

envelopes.” And reach the minaret:

I’m inside the fire. I have found the dark.

This is your pain. You must feel it. Feel it,

Heart, be faithful to his mad refrain—

For he soaked the wicks of clay lamps,

lit them each night as he climbed these steps

to read messages scratched on planets.

His hands were seals to cancel the stamps.

This is an archive. I’ve found the remains

of his voice, that map of longings with no limit.

I read them, letters of lovers, the mad ones,

and mine to him from whom no answers came.

I light lamps, send my answers, Calls to Prayer

to deaf worlds across continents. And my lament

to this world whose end was near, always near.

My words go out in huge packages of rain,

go there, to addresses, across the oceans.

It’s raining as I write this. I have no prayer.

in prisons. Now each night in the minaret

I guide myself up the steps. Mad silhouette,

I throw paisleys to clouds. The lost are like this:

They bribe the air for dawn, this their dark purpose.

Then be pitiless you whom I could not save—

Send your cries to me, if only in this way:

I’ve found a prisoner’s letters to a lover—

One begins: ‘These words may never reach you.’

Another ends: ‘The skin dissolves in dew

without your touch.’ And I want to answer:

I want to live forever. What else can I say?

It rains as I write this. Mad heart, be brave.

The Tale of a Chinar Tree
K. Satchidanandan

( In the conscience of which particle of dust there is the fire of Chinar, that heavenly dust can never feel cold. )

I was born in this dust

with fire that can never cool.

I blossomed even in droughts

provided shade to people in summer

and warmth in winter

a place for children’s play,

a rendezvous for lovers.

My core has memories

just as my hollows shelter birds.

I learnt my many postures from Patanjali,

The semiotics of my stem

The murmur of my leaves

My roots are hairs standing on end

listening to the verses of

the freedom-songs of Rahman Rahi

into flames kissing the sky.

meditated under my green umbrella.

I talk ceaselessly to

the dead and the living.

There are only Kashmiris here,

those who hug one another

during Id and Baishakhi,

breaking every stone-wall and thorny hedge,

those who grow lotuses

in their hearts for the birthdays

of Patmasambhav and Guru Nanak

and paint the lake with shikaras,

those who eat from the same plate,

drink the same water and

speak the same language of kindness.

Their religion was liberty

and their flag, love.

But now only blood spots remain,

the blood of a land being

the red blood of fleeing youth

the brown blood of the nail-marks

of the disgraced bodies of women,

from tender hearts torn by bullets:

That is what reddens my leaves now.

The spreading endless variations of red

from the eyes of children, once bluish,

Translated by the poet. Read the original here.

The chinar tree is a symbol of Kashmir. Its leaves grow yellow, mauve and red in autumn. A tree with medicinal value, the chinar adorns Persian gardens too. Saints of Islam such as Mir Sayyid Ali, planted chinars centuries ago; these are still alive in Kashmir. For Hindus, the tree is sacred to the goddess Bhavani. Chinars often have huge hollows in which children play and lovers secretly meet. It is also called the ‘speaking tree’ as the wind blowing on its leaves seems to be talking. Chinars have also been planted on the graveyards of hundreds of unknown Kashmiri martyrs slain by soldiers.
The proper nouns in the poem, ‘The Tale of a Chinar Tree’, refer to place names and names of the great poets, singers, saints and scholars from Kashmir.

Agha Shahid Ali’s ‘The Country Without a Post Office’ is from a collection of poems by the same name, published by Ravi Dayal Publisher and Penguin Books India in 2013.