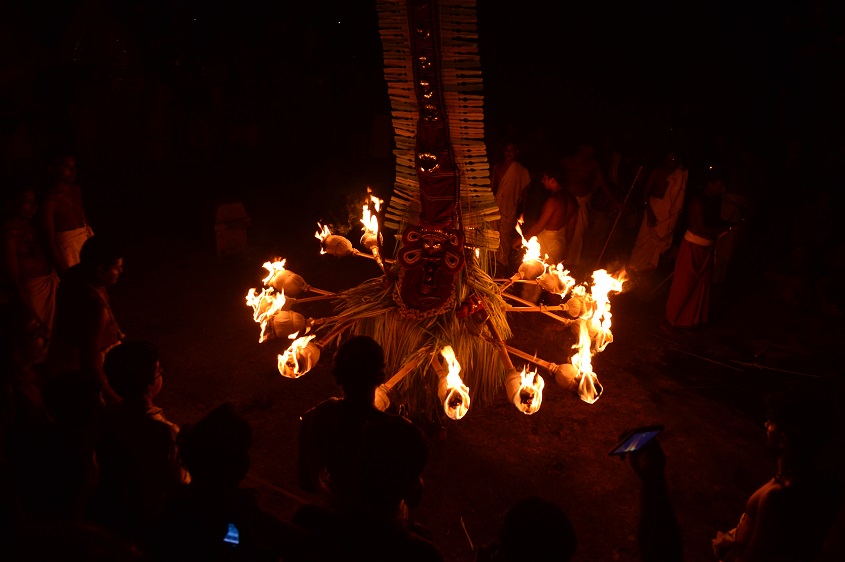 As I hobble towards the kaavu, I can see from a distance, hectic preparation for the evening’s Teyyam already underway. My left chappal broke on the way here and I’m carrying my chappals, instead of wearing them. It’s just my luck I think. I might have stepped on a patch of paramullu or some such thorny weed. The ball of my right foot that pressed down on something prickly has begun to throb slightly.

I recognise Balan and Krishnan bare-torsoed, strutting in white mundus supervising the unloading of the wood for the pyre on which the Thee Chamundi Teyyam will throw herself over and over 108 times later this week.

Soman in his kavi mundu, Kuttan, and Chandran in their white ones are working furiously on the long 20-foot headgear for the Kandakarnan Teyyam. They’re attaching the smaller torches (pandhams) to it. Their fingers fly nimbly as they fix the little pandhams. They are squatting on their heels as they work hunched over the mudi, shoulders tensed and head bent, focused intensely on their ritual labour. “Almost done?” I greet them as I pass. Soman looks up and grins widely “aaanh…” The others merely nod as they adjust their weight and scuttle sideways to reach the next length. Beside them I notice the larger pandhams (8×2 – 16) that will be attached to the Teyyam’s skirt. Do they look bulkier and larger than usual, I wonder?

I can see the villagers already straggling in slowly, and stand around watching the various activities of each of these groups. The little girls in their oily braids, and the younger ones in their kuli-pinnals all have heavily-kohled eyes. The little girls stare in wide-eyed excitement. Some of the younger ones shoot shy fluttering glances towards the bare-bodied men, who smile silently and resume their artistic labour with renewed vigour, sweat streaming in small rivulets down their backs.

There are young men too in mundus and trousers hanging around eyeing the young women with interest. A few of them converse loudly trying to attract attention. A tea stall is being set up on the far corner and Murugan is unpacking some masala vadas and pazham poris. The sight and smells are so familiar, and I realise that these are the evenings that I yearn for all year.

The vellattam is over. Despite the slight discomfort, the Kandakarnan’s uraiyal was achieved with remarkable speed. Soman, Balan, and Chandran held Karnan as he swayed and twitched and shivered as the chendas and maddalams kept a steady rhythm. I see Kuttan with his uncle and his friends. He has changed into a fresh mundu around his waist and a veshti with an English colour (rose) border hangs down his scrawny shoulder and chest on one side, as he claps and keeps time with the elathalams. His uncle and friends are dressed similarly but they are a little more portly. The muscles on their arms ripple as they drum. Karnan looks like he might be in his mid to late-thirties and is of medium build, with a slight belly emerging – the core muscles losing tautness. Physically, in his vellattam costume, he does not appear to be a model of strength and muscularity, but there is sinewiness to the feet, ankles, and legs and an intensity in the eyes and a firmness to the set of the mouth. Kandakarnan vellattam catches the eye and holds the gaze of some of the devotees. His eyebrows rise and his eyes widen as his shoulders tremble. There are some people here that I don’t recognise. I know almost all the people in the village and many of them devoutly come to watch the Kandakarnan Teyyam. It’s a spectacular Teyyam with lots of pandhams, fire, and drama. Kandakarnan seems to look at and beyond the persons whom he has fixed with his stare. The persons that he thus paralyses find it impossible to look away and feel the beginnings of a shudder deep down in their bodies. I feel a twinge of regret. As Karnan’s movements get stronger and stronger, the tempo of the music increases, and more young men move in to help Soman, Balan, and Chandran. They create a tunnel with their bodies cutting off the throng of supplicant devotees as Karnan’s body trembles and shudders in ecstatic being. I can no longer see what is going on.

I feel that the throbbing in my leg has now turned into an intense shooting pain. I can no longer stand or move. I sway and lose balance. Even as I try to steady myself, Kandakarnan erupts in flames. My whole body is on fire as I sink down to the ground. I can hear faintly the screams and the dying music but all I am aware of is the smell of singed hair, burning skin and flesh, mixed with the smells of burning coconut oil, and coconut fronds. As the first bucket of water rains on me I wonder what I am doing in the Kandakarnan costume. More buckets of water follow but the flames lick my body and caress my skin, loathe to let go. Karnan is after all the son of the Sun god. The flames embrace and curl around protectively enveloping him. But Karnan is gone, leaving me in the fiery embrace of his father. My body screams in pain and my mouth is dry. No sound emanates from my throat or lips. The fire is put out and I’m led to conclude a hasty ritual before being taken to the casualty ward at the hospital. I feel bare bodies and hands against my raw flesh, but I have no voice. As each item of Karnan’s costume is removed, it takes with it a piece of singed skin, hair, or flesh. Karnan is a greedy god, in love with my body, I think. But my body is so ordinary, Karna! I plead. You, on the other hand, are spectacular! Karnan smiles from the corner in my hospital room, I need your body Panikkar, to be magnificent, but hush now, you must rest!

Chappal: generally leather sandals but are also used to name any kind of open footwear irrespective of the material from which they are made. Flip flops are also referred to as chappal(s) in many parts of Kerala.

Mundu: a garment worn around the waist in Kerala, the Tulunadu region, and the Maldive Islands. It is closely related to the dhoti, sarong, and lungi.

Mudi: a crown or headgear worn by Teyyam performers.

Kuli pinnal (bath pigtail): a thin pigtail braided by young women after washing their hair. Since appearing in public with untied hair is considered morally deviant, kuli pinnal provides respectability, while serving the dual purpose of keeping hair under control (and therefore respectable) while allowing it to dry.

Chenda: a cylindrical percussion instrument used widely in the state of Kerala, Tulu Nadu of Karnataka and Tamil Nadu in India. The chenda is used as an accompaniment for Kathakali, Koodiyattam, Kannyar Kali, Teyyam and among many forms of dances and rituals in Kerala.

Madhalam (maddalam): a drum made out of the wood of the jackfruit tree. It has two sides for playing, made out of leather, and has different kinds of sounds on each side. A vital instrument in traditional Kerala percussion ensembles like Panchavadyam, Keli and Kathakali.