Towards a Deeper Understanding of Photojournalism Now

In Conversation with Sehar Qazi

Photojournalist Sehar Qazi’s first assignment was to report and write on the 2014 September flood in Kashmir. Since then, her work has focused on social issues, particularly those involving facing refugees and marginalised communities. Guftugu spoke to her about her work in progress as well as the convergence of artistic and journalistic practice.

Guftugu (G): What inspired you to become a photographer?

Sehar Qazi (SQ): I think a lot about the dynamics of human emotions and felt that I could represent them best with photos. Born and brought up in a conflict zone like Kashmir, I realised that words, and later photos as well, have an immense reach and can be used to humanise stories and events. In 2014, when I completed my post-graduation, my first assignment was to report on the September 2014 floods in Kashmir. I would often carry a small notebook and a mobile with me. In 2016, when I got the opportunity to work on a photo desk, I came across the work of many photographers on a daily basis. I started looking at photos on various agencies, started following the work of photographers globally and finally decided to pick up the camera and start a new chapter in my career as a journalist. 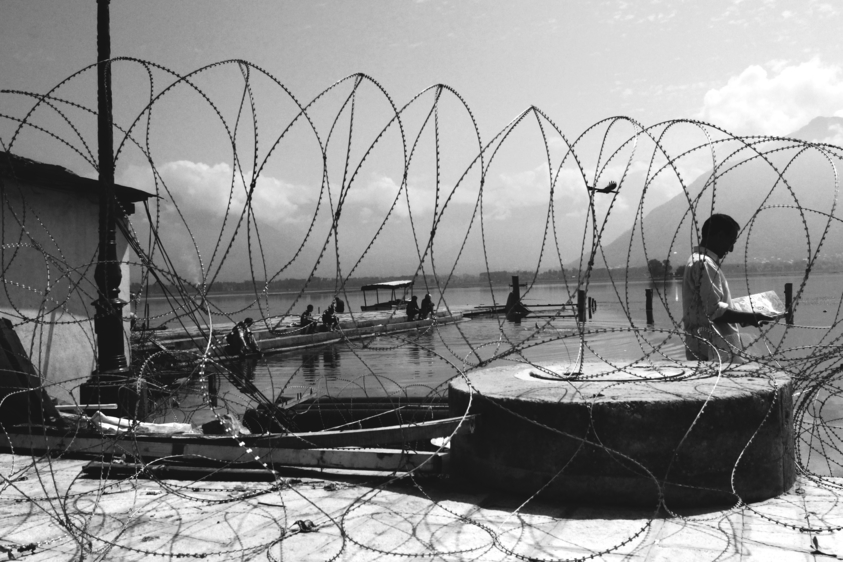 A Kashmiri man stands near the concertina wires at Hazratbal, in Srinagar, Jammu and Kashmir on 7 June 2018/ Image courtesy, Sehar Qazi. This photo is part of a series of an ongoing photo project in Kashmir. 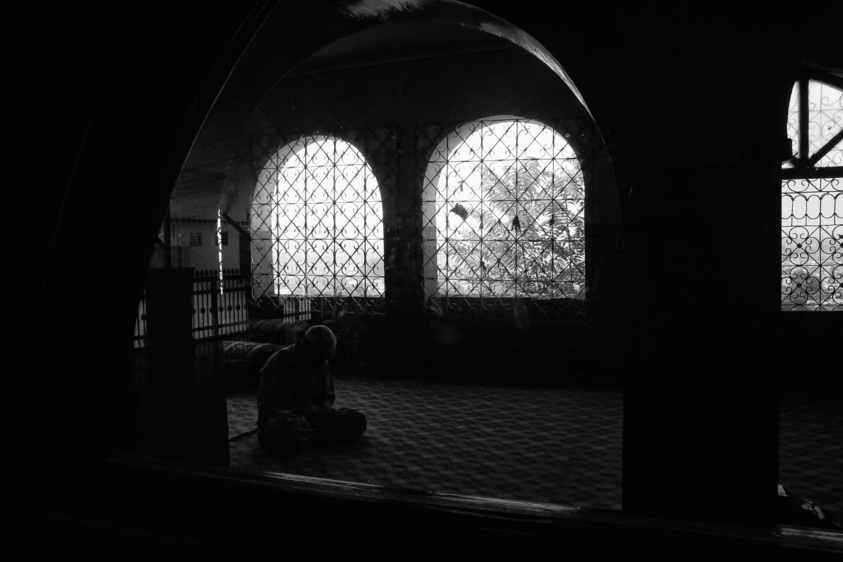 A man soaks in a moment of quietness inside the Makhdoom Sahab shrine in Srinagar on 6 June 2018./ Image courtesy, Sehar Qazi 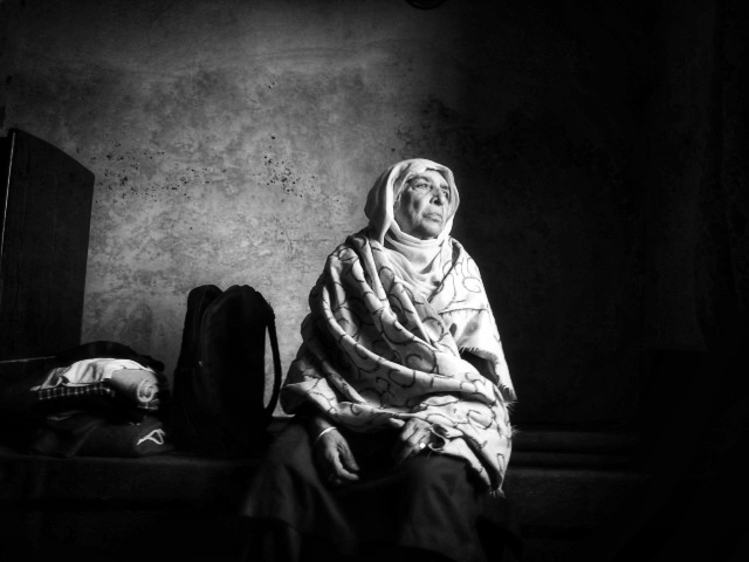 Taja, 85, looks out of a window in her house at Jawahar Nagar in Srinagar, Jammu and Kashmir, on 14 November 14 2014. ‘We could hear the screams of people before they drowned. When we rushed to check on our neighbours, all we could see was dust. The people living in house number 354 disappeared underwater. Living in the oldest house of the locality with a concrete plinth saved us during the floods. We stayed on the second floor for almost five days and were later rescued by our neighbours,’ says Taja./ Image courtesy Sehar Qazi. The photo is from the 2014 Kashmir floods, reported as one of the worst floods in 60 years. 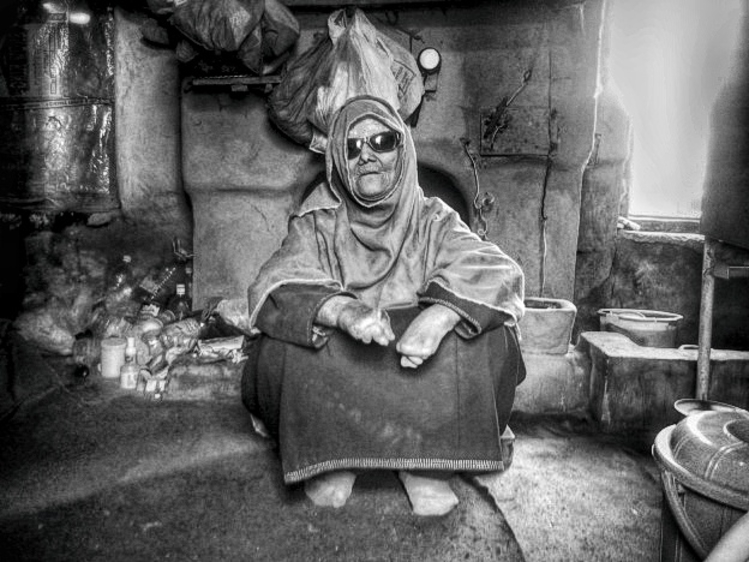 Reshim Jan inside her one-room house at Bahrar, the region’s last leper colony, in Srinagar, Jammu and Kashmir.  She is from Hayhuma in Kupwara and remembers the day she arrived at Bahrar. She hides her fingerless hands under her pink dupatta when she steps out of her room. Her left hand has an open wound, pale yellow and brown, and the inner flesh is clearly visible. Her black eyes have lost their vision and all she sees now are shadows. ‘I came to Srinagar with my nephew for an eye surgery. It got delayed and my nephew went back. I was sent here. I lost my eyesight after that. I don’t have a bathroom, nor do I have any tap for water. I starve for days in winter. My hands can’t bear the cold. I miss home, but I have spent the last seventeen years of my life here. I will die alone in the darkness of this room. This room is my graveyard.’ Tears trickle down her face as she finishes her sentence./ Image courtesy, Sehar Qazi. This picture was taken on 16 June 2015.

G: As a photographer, what is your understanding of the medium of photography?

SQ: I want my pictures to first make sense of my thoughts and then portray my feelings about the way events and situations unfurl. When we look at a photograph, we can feel the emotions and the mood the visual medium hopes to deliver. When we represent a story with photos, it communicates a different and a deeper understanding of the scenes and details of a person, a place, or an event. If we use photos with a story, they help a reader to understand things in a better way. I like to do narrative photography or long-form photography projects where I get to spend a lot of time with my subjects. As Joan Didion puts it, ‘I write entirely to find out what I’m thinking, what I see, and what it means. What I want and what I fear.’ I feel and think about photography in the same way, what powerful photographs hold and what they can communicate to the world.

G: Is photojournalism different from regular photography? If yes, can you tell us how they are different, and why?

SQ: Yes, photojournalism comes with more responsibility and requires a more structured method. It comes with greater challenges than day-to-day photography. Nowadays, a prime motivator towards photography is an image’s ‘Insta-worthiness’, and an urgency to deliver to social media. When we talk about photojournalism, it engages a viewer into looking at something more serious and something important. A photojournalist has to be more responsible for his/ her work, representing the facts as they are. Also, when it comes to editing pictures, it can be done extensively in regular photos, but we just can’t stage photos or manipulate the scenes in news story photos. 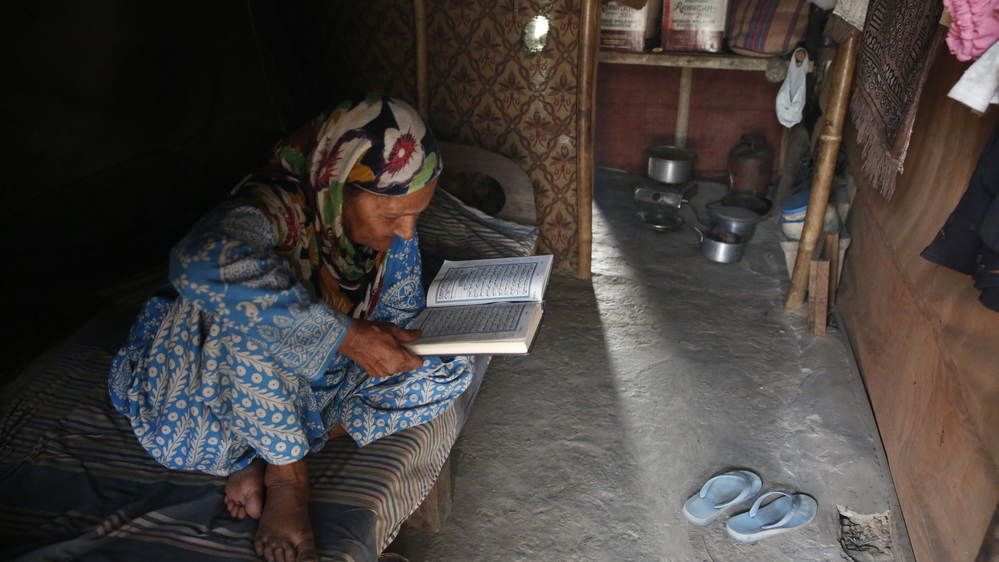 Rajma Begum reads the Quran while fasting during Ramzan at a Rohingya refugee camp in Shaheen Bagh, New Delhi, on 17 June 2017/ Image courtesy, Sehar Qazi. This photo is from an ongoing project on refugees in Delhi. For more, click here. Muhammad Ilyas, a Rohingya refugee, sits, surrounded by few clothes and things donated to him after he lost everything in a fire at the Kalindi Kunj refugee camp in New Delhi on 15 April 2018. Over 225 Rohingya refugees were rendered homeless due to a massive fire in the early hours of 15 April, losing everything to ashes. ‘I couldn’t save anything. I am left with this torn T-shirt and some borrowed clothes. How will I start everything all over again? Who will help me? I had saved some money, but now I am left with nothing,’ says Muhammad Ilyas who has been living in India for the past six years, in broken Hindi./ Image courtesy, Sehar Qazi. This photo is from the same series. 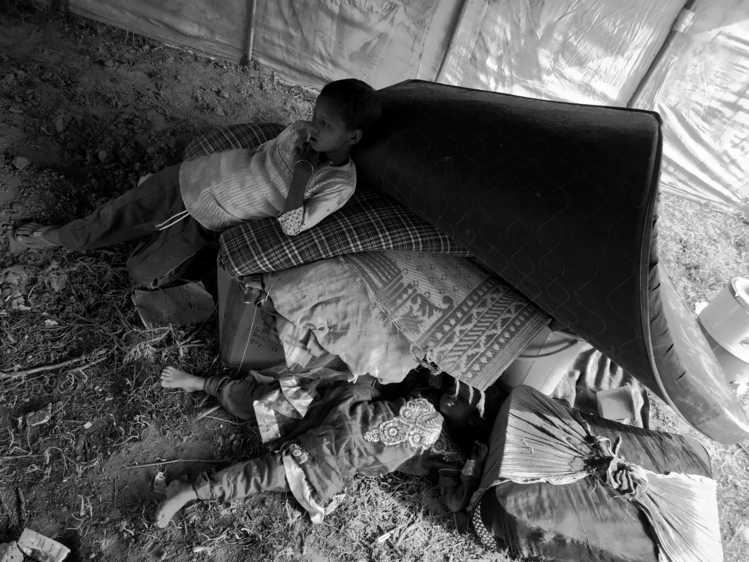 Children rest as their parents (not pictured) collect material for a makeshift tent after losing everything in a fire on 15 April 2018 at the Kalindi Kunj refugee camp in New Delhi on the same day./ Image courtesy, Sehar Qazi. This photo is from the same series.

G: Does a photographer’s political ideology affect her photography?

SQ: I think that we all have biases, manifesting from our upbringings, our socioeconomic backgrounds and also the politics of life around us. They most certainly have an impact on the way we see the world. If we say that we are not biased at all, we will be denying an important fact of our existence. I think that a photojournalist’s job is to report and bring photos while recognising the personal bias and making conscious choices that represent content outside the purview of our perceptions.

G: As a photojournalist, how do you reconcile your politics with your obligation to remain objective?

SQ: I believe that the relationship between a photographer and the collaborator (subject) is unique, irrespective of the background we come from. When I approach them, the first thing I have in my mind is the consent, whether they are fine with being photographed or not. Coming to the objective part, whenever I shoot, I try and capture a situation in its true version, keeping aside my perception, my ideas, my thoughts regarding that particular situation or how I want it to be, avoiding any kind of stereotypical portrayal in my pictures. A farmer from Tamil Nadu sits with the poster of Mahatma Gandhi tied around his neck during the same protest./ Image courtesy, Sehar Qazi.  This photo is from a photo series on Tamil Nadu farmers who protested at Jantar Mantar in Delhi for more than 100 days.

G: Nowadays, due to the widespread and easy availability of a camera, photography has become an inextricable part of mass media. How does this affect the photographer’s work, her perception, and representation of reality?

SQ: From clicking selfies to never-ending Instagram feeds, yes, photos are really an important part of our day-to-day life. I see people clicking graphic images and uploading them on social media without a second thought. Talking about photojournalism, it is a completely different story because it comes with obligations, with more responsibility, objectivity and with ethics towards a particular situation. A girl carries her younger sister to a makeshift playground outside their tent in a slum near Kalindi Kunj, New Delhi, on 21 April 2018./ Image courtesy, Sehar Qazi. This image is from a photo series called ‘Growing up in slums in Delhi’. Children look at the camera while playing outside their tent in a slum near Kalindi Kunj in New Delhi on 21 April 2018./ Image courtesy, Sehar Qazi. This image is from the same series.

Sehar Qazi, 29, hails from Srinagar, Kashmir. She completed her postgraduate degree in Convergent Journalism from the Central University of Kashmir. In 2016, she started her career as a photojournalist in New Delhi. Presently, she is experimenting with black and white photography instead of using a variety of vibrant colours for a long-term project (Refugees in Delhi) which she intends to complete by the end of this year. She currently lives and works in New Delhi. She can be contacted at [email protected].