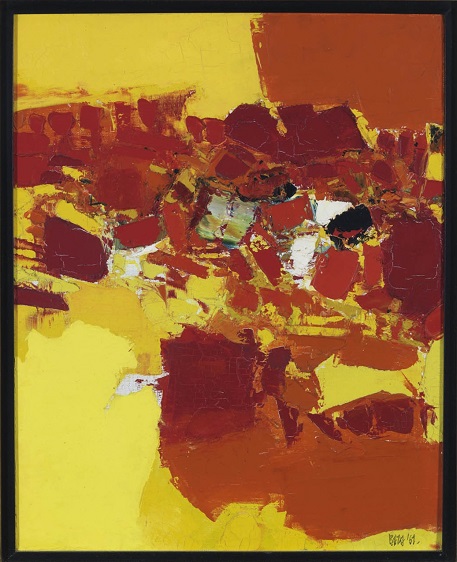 Trimukh was tiring like an ebbing flood. Each step he took in front of him freed itself and fell, like a comet freeing itself from the force of gravity. His gaze was being uprooted from him and falling, like a collapsing tree. His stomach felt as desolate as a ruined sanctuary.

Trimukh was a boy of about fifteen years. He had set out for Banaras. Walking silently. Carrying his mother’s bones. His village had receded far behind him. He did not even know how much further Banaras was from him. He had no money with him, nor food and clothing. What did he have at all besides these? It was only the filial duty of throwing his mother’s cremated remains into the river Ganga at Banaras that had made him set out. Crossing village after village. He was told that he would reach the railway station in two days. He had not yet ridden in a railway train. He had never even seen one. The railway, Banaras, his mother’s bones: all these things were choking his heart like a dam about to burst.

Today Trimukh was tired out by the incessant walking. His hunger and thirst were making him desperate. He could hardly eat his mother’s bones. He was exhausted. The tattered clothes he was wearing, the dishevelled, overgrown hair on his head, the dirt accumulated on his body, his concave stomach,his sunken eyes, combined with the bundle of bones he was carrying, made his appearance disgusting.

Trimukh was the son of the Mang called Sambha. His stomach was hollow with fear of his low status. His caste followed him about like a demon. He couldn’t forget his inferiority complex. His caste had hollowed him out. His humanity had died a long time ago. The only thing that remained in him was his disgusting caste. There was pressure of his caste on his mind. He couldn’t cross his limits.

‘I am a Mang’ was all he knew. He had often remained hungry, but had not stepped above his station in life. He had not wished to commit the sin of acting against the religion that had been handed down to him. He was diffident. He was fearful. His caste had made him helpless. While walking in the streets or travelling around villages, he acted as if he was balancing the weight of his caste on a high wire.

Someone had thrown some spoiled rice at the side of the road. Dogs were eating that rice. With a leap Trimukh sat down by that heap of rice. The dogs ran away. He started eating that spoiled rice. Just as fire laid siege to skyscrapers twenty-five stories high, hunger had laid siege to him. Each cell of Trimukh’s body had become a ravening hunger. Trimukh’s hunger had become as monstrous as a bursting dam.

The dogs were barking at Trimukh. That house, too, seemed to be rejecting him in the guise of a dog. The animal in that dog had died a long time before. All that remained was a domesticated human. After completing the tulsi puja with complete devotion, that new bride had gone inside. Along with her newly washed hair, the straying end of her saree, her rounded hips, Trimukh’s view of her vanished into the house.

In a little while, a household servant came out. He yelled at Trimukh.

The tulsi was a tame pigeon.

The dog was a domesticated man.

The household servant was a trained animal.

Even in that bright sunlight, who knows how Trimukh’s shadow disappeared into the shadow of the mansion. Trimukh was becoming distracted in the scorching heat. He had lingered in the shade of that mansion. He was reminded of the mansion owned by his master.

In order to avenge his defeat, the Patil collected about fifty goons and launched an attack on the Maharwada. They had burnt a few huts. They had killed Dagdu Mahar. The Maharwada had been destroyed. The backlash for this atrocity had registered itself everywhere. Many cases had been filed, and the post of Patil had been lost.

That post had gone to Dagdu Mahar’s son. Shivaji Patil was enraged at the insult. The worth of his status and his ancestry had been reduced to mud. The ignominy had bound their muzzles into silence. The Patil was blazing with vengeance. That the Patil’s post should go to a Mahar’s family was in any circumstance an inflammable matter for him. ‘A Mahar has become the Patil’: that was a pain he could not endure. He was being killed by it, though alive.

Shivaji Patil gave Sambha Mang a contract to kill. Sambha had to honour his instruction. Shivaji Patil’s favours to him were such that they could not be repaid. For Sambha, to disrespect the word of the Patil was a sin. He was ready to give his life for his master. His creed was that his master was the road to moksha for him. ‘Sambha, I don’t care if I lose all my fields, I’ll pay your bail and get you out. I’ll look after your wife and children very well. Don’t worry about it. Just remove this thorn from my way.’

Sambha murdered the son of Dagdu Mahar in broad daylight. He cut off his head, bound it in his upper garment and flaunted it in the Patil’s honour. A tremendous wave of fear shocked the village before departing.

The Patil was looking after Sambha’s wife and children. Saraja used to work herself to death in the Patil’s fields, and the Patil would feed her. Trimukh looked after the animals. The Patil raised him, considering it his fate. Day after day came and went like the breeze. She was like the animals in the Patil’s barn. She lived night and day, in daylight and dark, by the Patil’s hands and feet. The Patil’s words, his spit, his gaze, his wishes, had become the unbreachable boundaries of her life. After Sambha, she was totally in the Patil’s custody. She would do whatever the Patil told her and eat whatever he gave her.

Saraja became pregnant by the Patil. The whole village was up against the Patil. This had been so for thirteen months. Saraja’s belly was growing larger day by day. Her calves were swelling like the corn in the crop. The Patil’s sleep had become a torment to him. Sambha’s murderous hands stalked him day and night.

Saraja died of snakebite; the Patil performed her last rites.

Trimukh slowly began to slither like a snail towards the bathing pond. He set down the bundle of bones and took some water into his cupped hands. He raised his hands to his lips. The water smelled like soap.

Just then, some small children came running there. They began to harass Trimukh and started to throw pebbles at him. After some stones landed on his forehead, Trimukh shook his head. His head felt lighter just as a stove grows lighter after it has run out of kerosene. He staunched the welling blood and screamed. The children began to laugh out loud. They found his strange screams amusing.

Trimukh came to the outskirts of the village. The sun was blisteringly hot. Trimukh cried out like a strange bird. He leapt about a few times. He threw the dust around and began to run. Just as dried leaves fall from trees and fly away with the wind. Memories of his mother were settling on his heart like a flock of birds. The Patil’s words were ringing in his ears: ‘Take your mother’s bones to Banaras and throw them there. Her dead soul will find peace. You are her son, aren’t you?’
A desolate moorland dancing with mirages. A route that, like a serpent, did not come within reach. A time that choked the throat of a dove. A totally hushed environment. A hot sun that fell harshly on the head. And a completely harassed Trimukh. He was trampling his way, sunstruck and thirsty.

Trimukh lay motionless under a tamarind tree along the way. He began to eat the tamarind leaves that had fallen to the ground. He began to swallow the sour juice from them. His stomach was not responding at all. The sour taste was causing his tongue to shiver. His mouth was trembling. Trimukh vomited a couple of times. A thousand black waves of unconsciousness were galloping over his body like mounted horsemen. Taking his mother’s bones as a pillow, Trimukh lay down and closed his eyes. Languor took possession of him.

Trimukh got up. The day was declining towards sunset. Now he must reach close to the next village. He began to walk with a new strength. He could hear the festive sound of the shehnai. His hopes had begun to rise. In the next village there must be a public feast at the home of some Patil or sarpanch. He would at least get some food there. He was walking with that hope, and his stomach had long since gone into the village and was roaming around it from house to house.

Outside the village, in Bhimnagar, a celebration of Dr. Babasaheb Ambedkar’s anniversary was in progress. All the Buddhists had gathered enthusiastically. A Dalit activist was passionately giving a speech. Trimukh had become an inseparable part of that intensity. He got a meal there. At night, he slept in that very same enclosure.

Trimukh left Bhimnagar. Outside the village he found the thighbone of some animal. He went on walking like a man with a contagious disease. Then he found an animal’s rib. Trimukh began to collect animal bones. Animal bones and his mother’s bones had accumulated with him. He went further ahead. Outside the village there was a hut. An old crone sat coughing in the hut. Buying bones was her business. She was very tired. On account of her age she could not see too well. Her only son had set out that morning on his bicycle to buy bones in rural areas.

Trimukh gave that old woman the animal bones. The old woman evaluated the bones. To Trimukh’s eyes, the old woman’s hands stood before him like those of the goddess of justice, holding the scales. The weight of the animal bones was proving insufficient. The Banaras in Trimukh’s mind went up and down like the weighing scales. Trimukh put his mother’s bones into one of the scales, and Trimukh was given one rupee. He would have reached the railway station by that evening. He turned around and looked back. Bhimnagar could be seen at the distance of a shout. Trimukh set out in the direction of Bhimnagar. Like a sunflower at the pace of a thousand storms.

Trimukh wanted to donate the rupee he got from selling the bones to the fund collected to set up Dr. Babasaheb Ambedkar’s statue.

The English translation of the story was published in the collection The Dalit Brahmin and Other Stories, Orient Blackswan, 2017.

Sharankumar Limbale is one of Maharashtra’s foremost writer-activists, and the author of more than forty works, including novels, poetry, short stories, and essays.

Priya Adarkar is a writer and translator who has translated the works of iconic Marathi writers and playwrights such as Vijay Tendulkar, Satish Alekar and Vishnubhat Godse.

Sayed Haider Raza (1922–2016) was one of modern India’s greatest painters and abstractionists. He was born in Babaria, Madhya Pradesh and spent most of his life in Paris, before returning to Delhi in 2010.