Rebellions on Paper and on the Streets

Consider these words from a Prime Minister: ‘… whether I am a writer or not, I am an admirer of writers and I think that they perform not only a useful but an essential function at any time…’ The writer performs a function that is essential to the country; and the country, we find out from the same Prime Minister’s words, include both the citizenry, of which a writer is a part, and the state. This is one central point made by Jawaharlal Nehru in his Inaugural Address at the Fourth P.E.N. All India Writers’ Conference in Baroda in 1957. It can be a little hard to believe this today, but we had an India in which the Prime Minister could discuss rationally, in a public gathering, what a writer is, and what the state and writer have to do with each other.

In times of censorship through intimidation, and the tacit or open support of the state and its ideological allies, it’s useful to recall what Nehru had to say about the ‘important question of the individual freedom of the writer’ in his 1957 address. Nehru was clear that this freedom was critical; equally critical was the relationship between the state and the writer. The state must encourage writers, but not act as an arbiter of what is adequate, ‘competent’, ‘good’ or ‘bad’ writing. And writers and literary bodies have to be autonomous; the state has no business to interfere in these bodies. Nor, Nehru may have added, if he could have seen where these cultural institutions are today, should they toe the line of the prevailing ideology of the day. 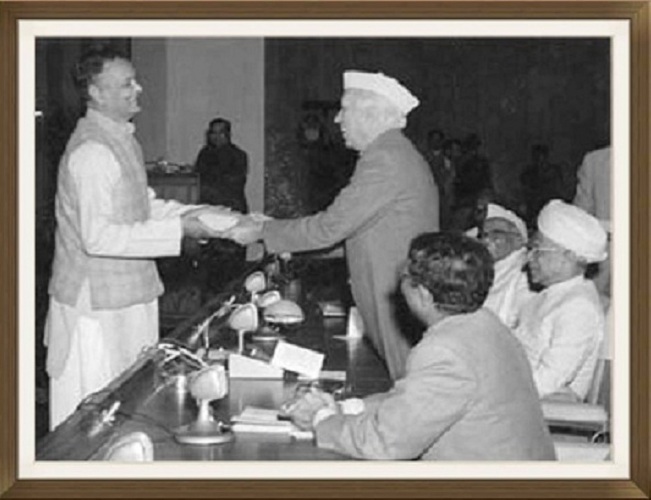 We have not heard any views on writers and their role in society from the present Prime Minister, Mr Modi. But we have, alas, heard from his official and unofficial teams.

In 2015, a large number of writers returned their Akademi awards to protest against a range of developments summed up in the somewhat inadequate word ‘intolerance’. The writers were protesting the murder of citizens, from Mohammed Akhlaq to MM Kalburgi; curbs on free speech and dissent; communal violence and the increasing and violent polarisation of the country. The writers questioned the silence of both government and Akademi on what was happening. Culture Minister Mahesh Sharma said of the writers: ‘If they say they are unable to write, let them first stop writing. We will then see.’ Speaking to The Indian Express, Sharma added: ‘This is an award given by writers to writers. It has nothing to do with the government. It is their personal choice to return it… we accept it.’

The writers said that they could not be silent in the face of the vicious assault on India’s culture of diversity and debate. In response to these voices, and the voices of other members of the cultural, academic and scientific communities – citizens all – the Finance Minister, Arun Jaitley, wrote that this was a ‘manufactured paper rebellion’ against a ‘manufactured crisis’. That a Minister in government should describe attacks on citizens for what they write or eat, or which community or caste they belong to, is shocking. But the accusation of a ‘manufactured paper rebellion’ is also telling. For the current dispensation, for the India they want to make, writers are manufacturers in the sense of fabricators; fundamentally, they are liars. This, of course, is a complete failure to understand how writers speak of the place they live in through their work. It is also a denial of the fact that writers speak, and should speak, as citizens, on the public stage. Contrast this with Nehru’s insight on the fact that the writer is not part of some special ‘tribe’ separate from other constituencies: ‘People sometimes ask… something about a writer’s responsibility in a rapidly changing society, as if this tribe of writers is a peculiar kind of group separate from the rest of mankind from that particular perch on which it sits.’

Worst of all is the hatred against criticism, debate, dissent and imagination we see today, the fear of all the traits so valuable to writers, readers and citizens. Nehru’s 1957 Inaugural Address is one small signpost to remind us of who we are, and where we come from. 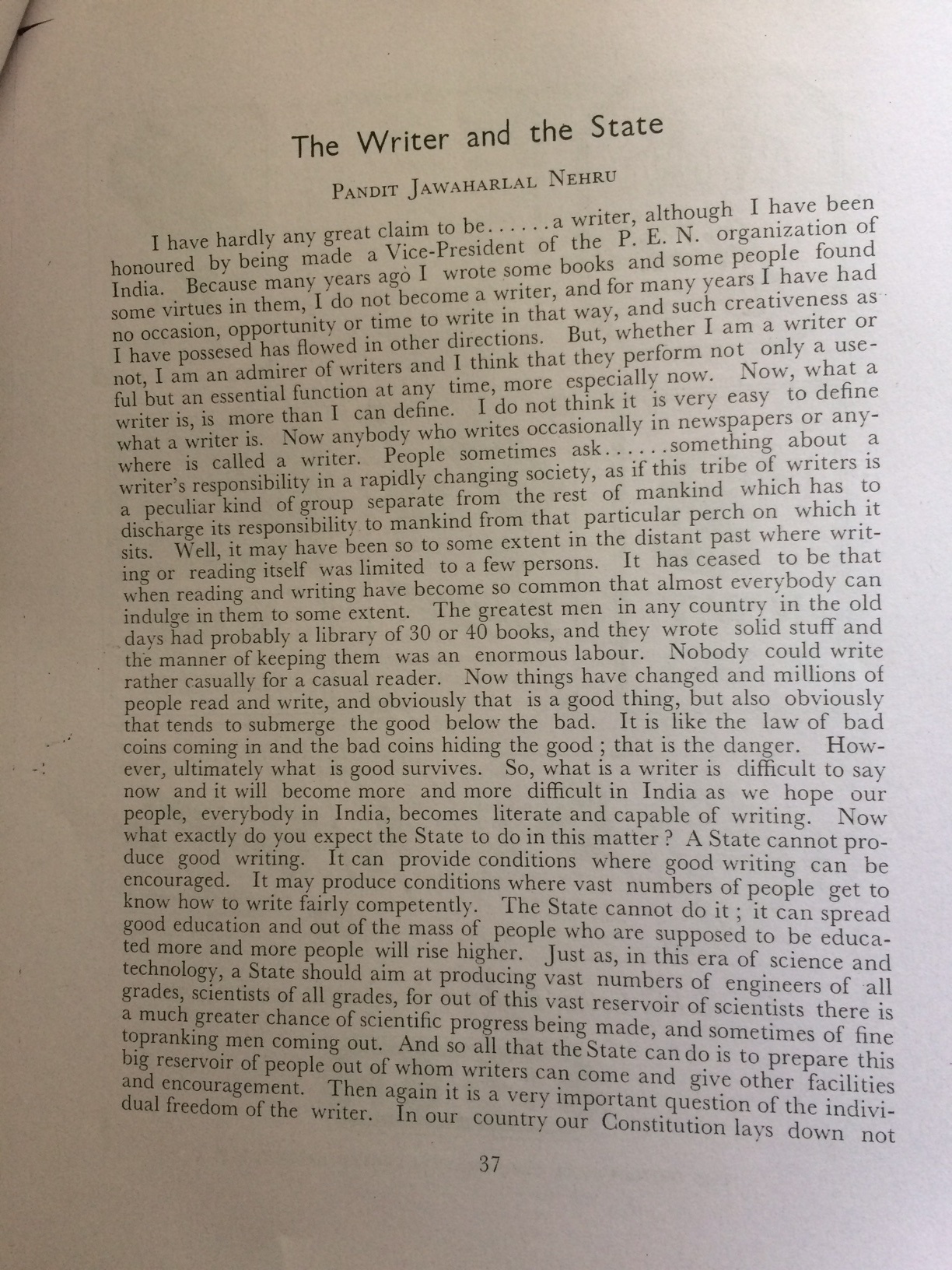 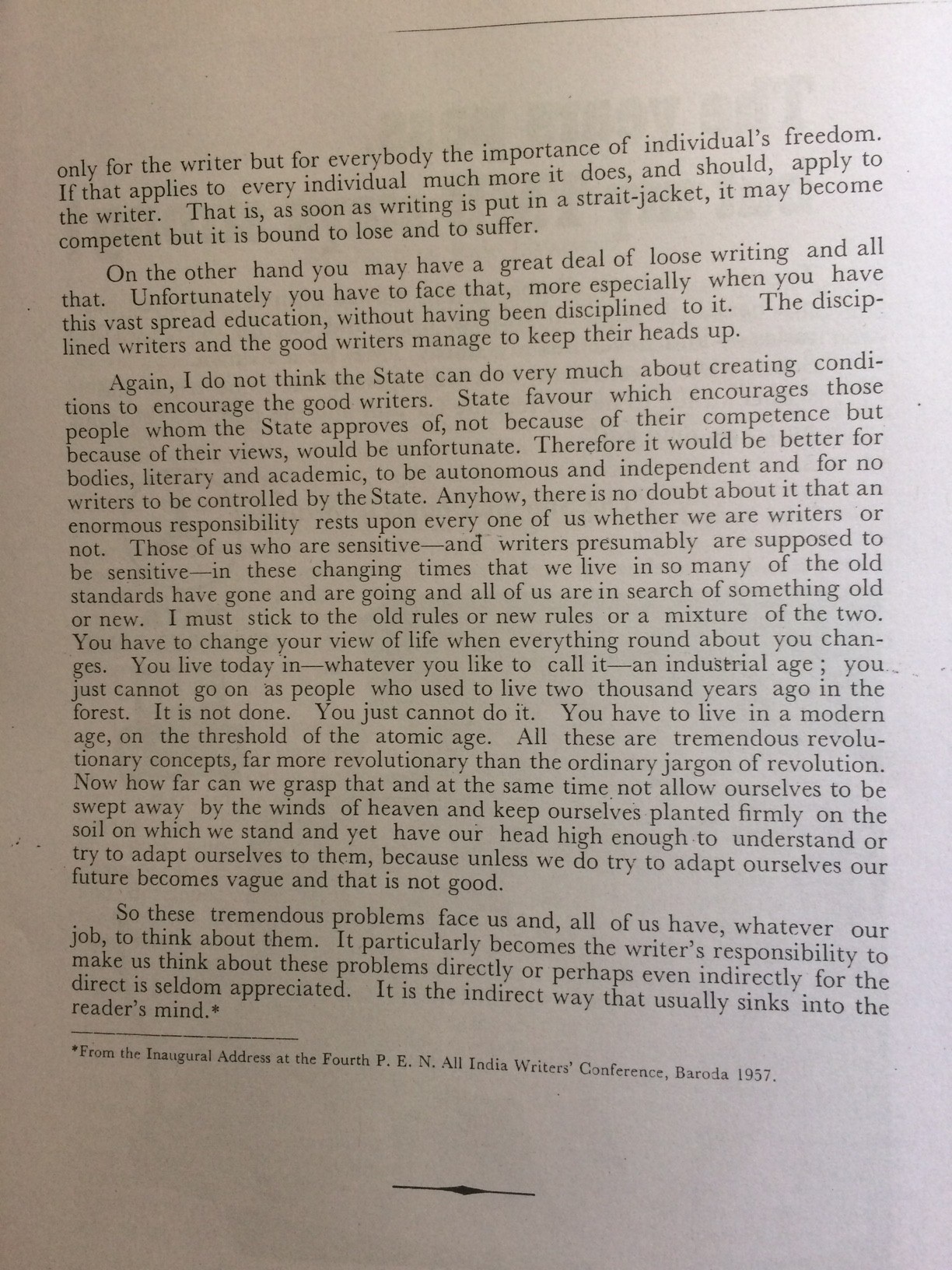 The India that Nehru, and we, as citizens, assumed, not just as a vision, but as a reality: it is not really gone. It cannot be gone, because we will not let it go. We will make more rebellions, on paper, on image and celluloid. We will read, write, sing and paint them. We will take them to the streets.