Along with Kanupriya Dhingra’s Hindi Translations of Three Poems 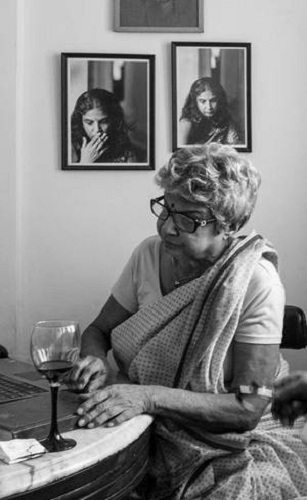 Eunice de Souza: Two. Have you read them?

Eunice de Souza: I’m quite fond of the other one (Dev & Simran), but nobody reads it. It’s got some very good reviews.

Several obituaries written after de Souza passed away a month ago, described her as ‘acerbic’, ‘sarcastic’, ‘endearing’, and ‘witty’. The range of writers who wrote an obituary for her – from womens’ activists to poets to theatre directors, most of them her students – shows the variety of people she influenced in her lifetime. This is why we are surprised by de Souza’s remark in the interview – ‘Nobody reads it.’ Is it another case of admiration for the person, not her work – one of our national pastimes?

We like to think of de Souza as an interventionist. Her interventions were critical; her style sharp, often puncturing accepted critical notions on Indian poetry in English. Consider her substantial work as an anthologist – Nine Indian Women Poets, published in 1997; it put to test Arvind Krishna Mehrotra’s landmark The Oxford India Anthology of Twelve Modern Indian Poets, published in 1992. Here is her admiration for Mehrotra’s work:

What is important about this anthology, however, is its crisp introduction, the clear focus on language and craftsmanship, rather than on thematic content. The focus is a welcome relief after, for instance, Vilas Sarang’s dated and woolly ideas about ‘Indianness’ and the ‘dangers’ inherent in women’s writing about the self, in his anthology Indian English Poetry Since 1950 (Orient Longman, 1990).

The two sentences, however, come only after her snide remark on the absence of women poets in Mehrotra’s anthology:

Arvind Krishna Mehrotra who once remarked in a review that ‘the rate of mortality among the Indian poets in English must be the highest anywhere’, reduces the number of women poets represented in his anthology… to one.

Her anthology introduced us to poets like Mamta Kalia, Melanie Silgardo, Smita Agarwal, Sujata Bhatt, Charmayne D’Souza and Tara Patel, apart from the more visible poets such as Imtiaz Dharker and Kamala Das. We must point out that Mehrotra’s exclusion of women was a matter of principle. He had intended to show the ‘sharp-edged quality of Indian verse’, and pitted his anthology against R Parthasarathy’s earlier Ten Modern Indian Poets. Eunice de Souza is the only woman poet who, in his opinion, fitted the criterion. This is certainly an apt assessment. Notice the lack of sentimentality when she writes of death:

Forgive me, mother,
That I left you
A life-long widow
old, alone.

It was kill or die
and you got me anyway:
The blood congeals at lover’s touch.
The guts dissolve in shit.

In dreams
I hack you.
(‘Forgive Me, Mother’)

I hold the child up in delight.
The revolving fan cuts her through.
It’s a dream.
I’m you.
I heard your fumblings in the dark.
Woke on wet beds.
Kniving marshes.
I’m you.
You’re the cold wind.
The grey mist.
The black dawn. The grinning skull.
I’m you.
(‘For My Father, Dead Young’)

In her own anthology, she fills the pages with women poets, whose styles share the same ‘sharp-edged nature’ as hers. Here is Melanie Silgardo, de Souza’s student and collaborator, writing of her father:

Father, you will be proud to know
you’ve left something behind.
The year you died
I inherited a mind.
…
Wherever you are, will you
turn your index finger away?

I grant you divine power that it took
to live your kind of life,
both villain and hero of the piece.
Father, perhaps you lived too much.

And now I’m writing with my life.
The price of an inherited crutch.

de Souza’s work, however, is not limited to contemporary writers. She had a penchant for writers from the eighteenth and nineteenth centuries, and championed their work in Early Indian Poetry in English. First published in 2005, the anthology challenged the widely held opinion that pre-Independence poetry in English is only mimetic. Here is Mehrotra again: ‘Henry Derozio, Toru Dutt, Aurobindo Ghosh, and Sarojini Naidu were courageous and perhaps charming men and women, but not those with whom you could today do business.’ He has changed his stance now, with an essay on Dutt’s bilingualism in the recently published A History of Indian Poetry in English edited by Rosinka Chaudhuri; but de Souza perceived the relevance of these voices, and made a case for their poetry much earlier. ‘In any case,’ she writes, ‘an anthology like this one can only be a part of the story. There are probably many forgotten writers in libraries all over India.’ In the same way, Eunice de Souza the anthologist is only a part of the larger story of Eunice de Souza the writer, and editor. 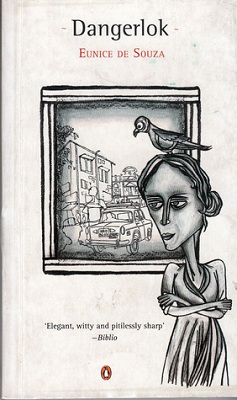 Although she is known mostly as a poet and a teacher, reading her novellas feels like a gust of wind on a humid afternoon. Think of the ingenuity of the title, Dangerlok. In the novella, the word is used by one of the characters to describe the people of Bombay. It is likely that de Souza picked it up from Bombay’s streets. Overhearing conversations and using them as material for their writing is a phenomenon common among Bombay poets, especially Arun Kolatkar. 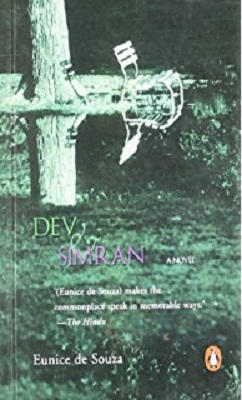 Dev & Simran was published two years later, in 2003, and here, we get a glimpse of a different sensibility. The novella is about a group of friends who help Simran cope with her child and her husband Dev’s death. The style is remarkably plain and straightforward; never sentimental. Death is depicted as an unremarkable fact of life and this is reflected in her description of death in the novella: ‘‘did I really once think that death made life more meaningful? … I don’t think I was stupid enough to actually say that to anyone. It’s a very idiotic idea’.’ Through a series of first-person accounts, we learn that they mourn Dev’s death together. The novel is imbued with a quaint lightness, lightness that imparts a valuable message about mourning the death of people who are dear to us: one cannot carry the memory of death around as an existential weight; one has to let go. Simran’s letters to the recently deceased Dev are her work of mourning, slowly healing her as she comes to terms with his death. ‘No one lives life as if death is around the corner’, after all.

It is only de Souza who can make you laugh while describing death. Here is one short section from the novella:

‘Deblina,’ I said to my assistant at the Women’s Studies Unit, ‘if I hear one more person saying ‘the Good Die Young’ or some such, I shall scream.’
‘They have to say something,’ Deblina said.
‘They don’t have to say anything. ‘Time Heals’. God! The man’s barely dead. And Time doesn’t heal.’
‘I don’t know about that. I’ve no experience.’
‘Sim and I bought that bar for him. It wasn’t really a bar, just a rather lovely, delicate cupboard. And we asked the guy to stick it on an old carved table. It turned out well, didn’t it?’
‘How’s Sim?’
‘Inundated with relatives.’
‘Sheesh.’

On a more serious note (as if death wasn’t serious enough), de Souza is one of the few writers who worked on the shorter forms of writing and polished them to perfection. Her poems are almost always short, and work like short jabs a boxer throws before landing a knockout punch. The novellas, too, are strung together by episodes and snippets of conversations (like the one quoted above) to make a book which seems incomplete, but, at the same time, works precisely because it is incomplete.

Under the dusky mango tree
ceremonial shaving of heads.
The newly bald make fun of each other.
The newly dead is an unknown quantity
urged on by the tuneless singing of the women,
and men in white standing their ground.

It’s time to find a place

It’s time to find a place
to be silent with each other.
I have prattled endlessly
in staff-rooms, corridors, restaurants.
When you’re not around
I carry on conversations in my head.
Even this poem
has forty eight words too many. 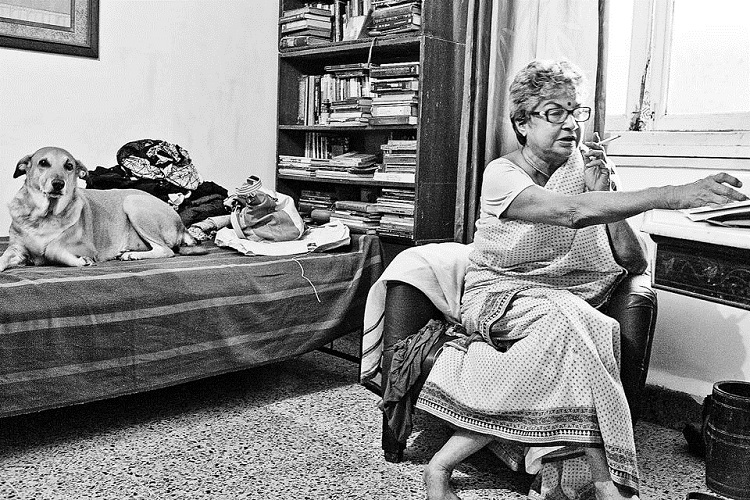 Kanupriya Dhingra is an MPhil research scholar at the Department of English, University of Delhi. Her translations have appeared in Indian Culture Forum and The Sunflower Collective.

Souradeep Roy is a poet, translator and member of the Guftugu editorial collective.

Sneha Chowdhury is an MPhil research scholar at the Centre for English Studies, Jawaharlal Nehru University. She is part of the  Guftugu editorial collective.