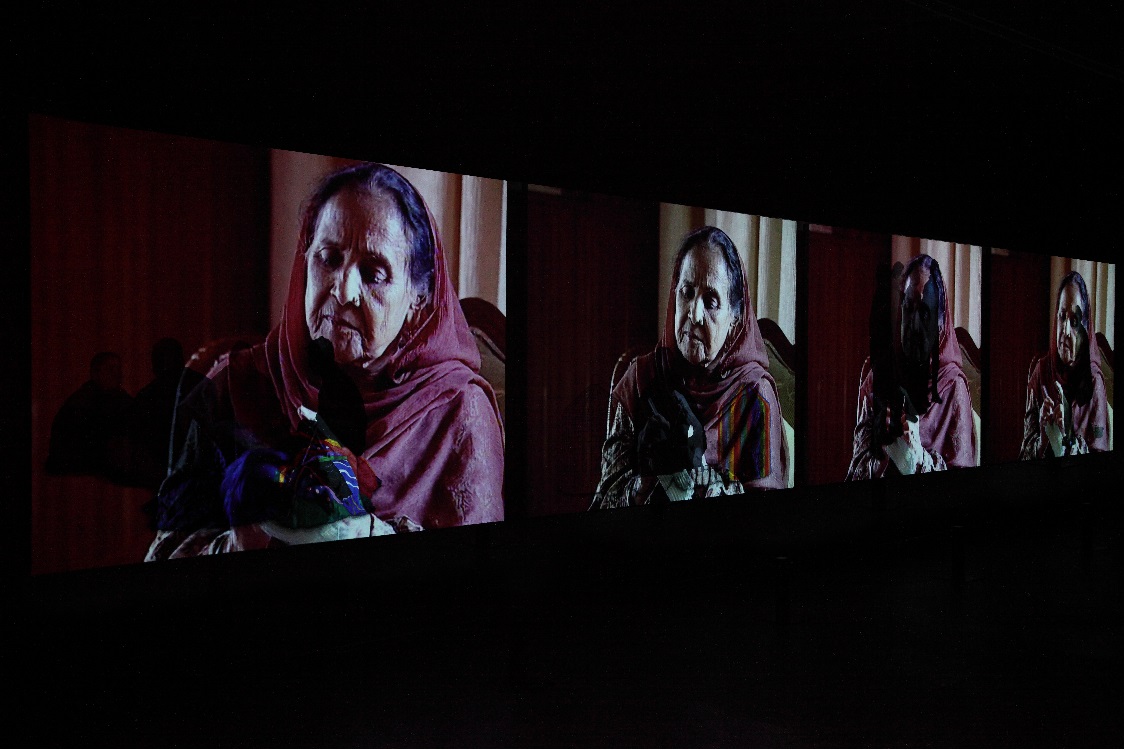 Crossings is an epic, with four screens spread over four oil paintings upon which four video images play out. The oils themselves comprise isolated individuals, singly, together or in line. These might be refugees or simply bystanders, contemporary figures who come from ‘somewhere else’, surrounded by spaces they don’t know, able to survive only through projecting upon what is around them their memories of the past. Images swirl round them like birds…

In full display here is the key grammar of Kaleka’s work, an oil painting that becomes a moving image, blank spaces that become suffused with projectiles drawn from memory. It is intended, says Kaleka, to be a ‘painting living within time and time living within the painting’, a ‘play between stylisation and verisimilitude’. 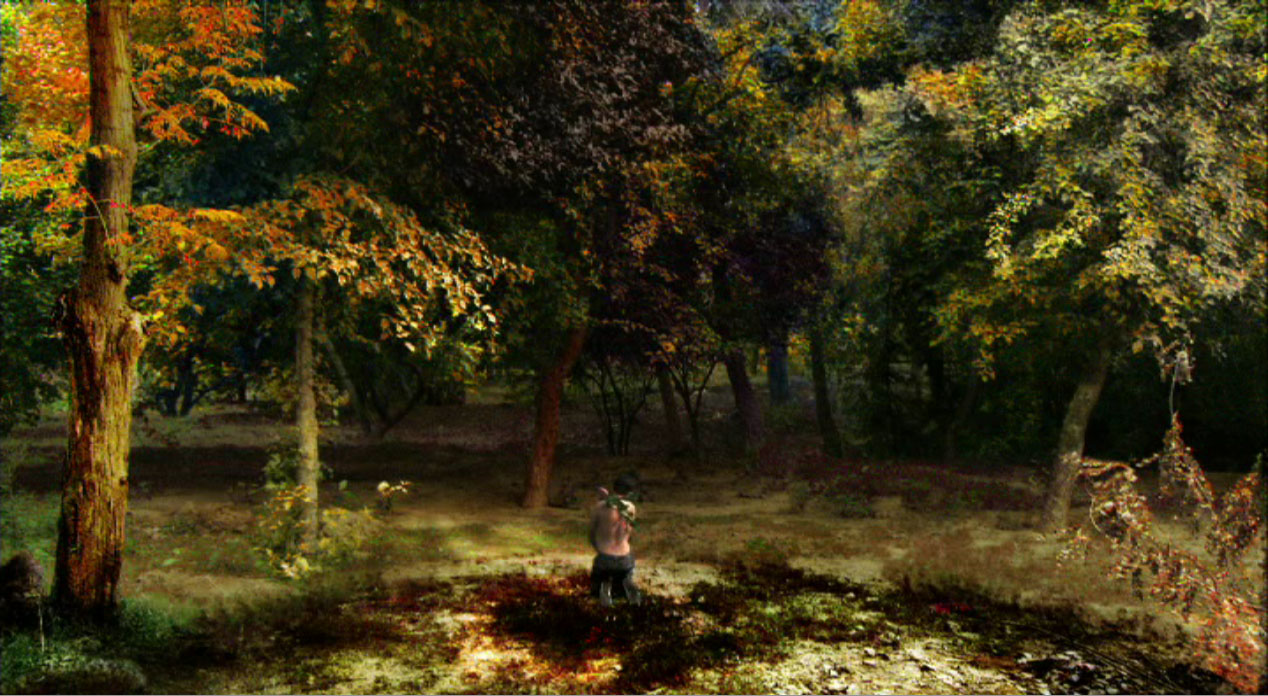 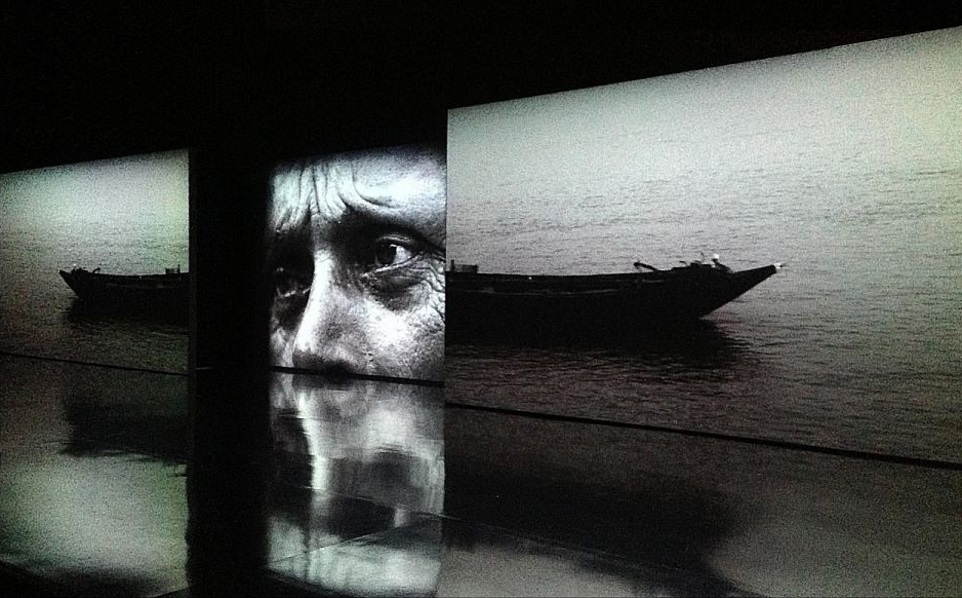 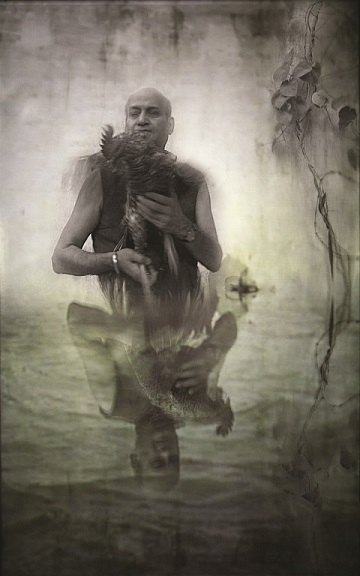 A bald man with a placid, Buddha-like face, clutching and letting go then clutching and letting go a plumed fowl: this rhythmically repeated, soft-grey image offers a tantalising grasp of desire, an allegory on dispossession. Kaleka’s subject-matter is representational and yet, by the form and brevity of its videoed avatar, by a trick of durational fallacy, by sheer transience, it erases its signified meaning.

The imaged body – at the brink of dissolution and disappearance – reads like an index of mortality. Its quotidian identity is subordinated to a fragile sense of being where no assertion, no action is necessary except that which trusts in a minimal continuum of survival. The language of representation enters the liminal zone and the encounter, sanguine, serene, evanescent, resembles a haiku where the hypothesis offered about a lived life needs no backing of proof.

The text by Ashish Rajadhyaksha is from his curatorial essay for the exhibition ‘तह-सतह : A Very Deep Surface, Mani Kaul and Ranbir Singh Kaleka: Between Film and Video’.

The text by Geeta Kapur is from ‘Inside the Black Box: images Caught in a Beam’, a talk on video- and light-based installations given at the Jawaharlal Nehru University’s School of Arts and Aesthetics on November 10, 2005.

Ranbir Kaleka’s work reflects a view of the world that is highly internalised and appears to place much reliance on the juxtaposition of improbabilities. In iterations of figurative painting and sculpture the relationship with the metaphysical and surrealist imagination is oblique rather than direct; he incorporates personal experience with wider and more general issues. A later body of work sees him as a painter of expressionist fabulism. Kaleka’s movement into video art, in which he projected video onto a painted canvas, has been an essential endeavour in his further exploration of the ‘psychological event’, one which can take place only outside the physical confines of the frame of the painting, through the use of light to create the image and the subsequent aura of the image. Kaleka has also created and exhibited constructed photographs, sculptures and installations; his work has been widely exhibited in India and abroad.