This selection is dedicated to the first death anniversary of Professor M.M. Kalburgi on 30th August 2016. The day was marked by a gathering in Dharwad of cultural activists, as well as many of the writers who returned their awards in 2015 in protest against the murder of Kalburgi and the rationalists Narendra Dabholkar and Govind Pansare. Of the five poets in this selection, Surjit Patar, Darshan Butter and Jaswinder were among the writers who returned their awards in 2015. Returning his award, Patar said, “The murder of writers, scholars and thinkers in this diverse country is painful… Even more painful is that these murderers get away…” 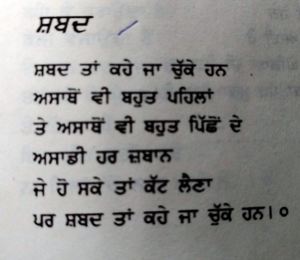 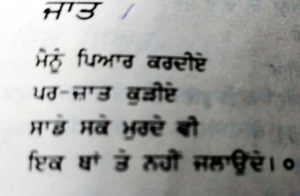 You love me, do you?
Even though you belong
to another caste.
But do you know,
our elders do not
even cremate their dead
in the same place.

the word I respect most —
whenever it appears,
all other words lose importance.
This word means —
The children of the land
who still measure time
by the shadows of trees.
They have no problem but that of the stomach.

And when hungry
they can chew even their own limbs.
To them life is a tradition
and death means nirvana.
Whenever someone talks about
the “National Unity” of all Bharat
I feel like
knocking off his cap
and telling him
that the many meanings of Bharat
do not relate to any Dushyanta.
Instead they are registered in the farms
where food grows, where break-ins happen. 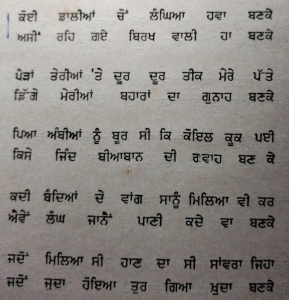 Someone passed through the branches like a breeze; I’m left behind, the sigh of a tree.
On your footprints, far away, my leaves fall, stains of my youth’s desires.

The mango blossoms bloomed, the cuckoo cried out, witness to some life in the wilderness.
Please meet me sometime, the way humans meet, instead of passing by like water or breeze.

When we met, we were both young.
When we separated, you left as a god. 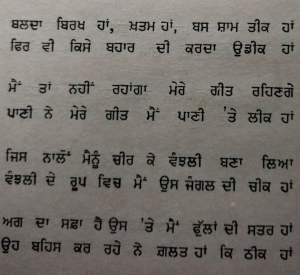 I am a burning tree, exhausted. I will last only till night.
Still, I wait for some spring.

Though I will not remain, my songs will.
My songs are water, I am only a fleeting line on its surface.

I became a flute, and as that flute,
I am the crying call of the jungle from which I was torn.

On a page of fire, my words a row of flowers.
They debate whether I am wrong, or right.

The Colour of Pain

Some words are reserved
To make poetry out of conscience,
Some sayings flower
In the muddy earth of the soul.

When does life stop complaining about hardship?
When does time stop
To argue with Sun and Shade?

What play is this, what is being played out onstage?
The wound plays the dagger.
The promise was a melodious tune; what noise is this then?
What did we hear about and what is being made?
What kind of war is it? I am on both sides.
Why do I have to fight myself?

The words I am writing on these lifeless papers:
I write a certificate that I am alive
(Words) which don’t burn with the body, remain alive till doomsday
Writing to identify those wounds
The day history was pierced thorn-like into the heel
Since then I have written the scene of the city’s cross
Listening to which the heart full of blowing wind was pierced
I write the scream of that deer in the desert
Guard in my heart the anxiety of the other shore
I write hymns to control the wrath of the Chenab
What helplessness despite butterflies and flowers?
When I wish to write it, I find I’m writing about ruins!