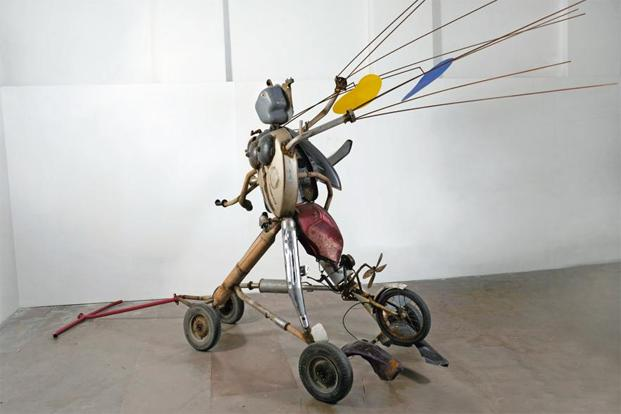 The starting point of the show “409 Ramkinkars” (2015) is the work of one of the pioneers of modern Indian art, Ramkinkar Baij. The challenge of paying homage to the critically inspired and restless Baij, and the equally challenging “retake” of his work and idiom for the present called for an innovative artistic strategy. Vivan Sundaram calls the creative response “a show of paintings and sculptures in spatial and theatrical terms”.

The response, in fact, was more than a “show”. It involved promenade or immersive theatre, so that the lawns, exhibition gallery and Mati Ghar areas of the Indira Gandhi National Centre for the Arts in Delhi became a performance space for an audience of about 150 people, walking a two-hour journey of  installations, theatre-performances and songs. The journey-performance brought together art and theatre, Baij and the contemporary artist. This multi-stranded engagement also brought together artist Vivan Sundaram, former National School of Drama director Anuradha Kapur, and the theatre group VIVADI.

Guftugu spoke to Vivan Sundaram about the project.

Extracts from an interview with Vivan Sundaram

Revisiting a historical figure in art

How would a contemporary artist return to a historical figure? …Not in terms of biography or heroic representation, but in a creative, critical way? …My interest is in repositioning him [Ramkinkar Baij] in terms of the contemporary.  My engagement with installation art already implies a very different spatial aspect, an architectural context, and repositions any work within that defined space. …Ramkinkar was asked, “Are you a sculptor or a painter?”  He said “I ride two horses.”  But there’s a third horse he didn’t mention: theatre, theatre in all forms. He did set designs. He made the comment “I’d like the viewers to first go on stage and look at the sets”. He also directed plays and acted in them; very little information about them remains.

There is this big hall (120 feet by 40 feet) and there are twelve distinct spaces. So I said let me propose from Ramkinkar’s paintings, mainly, certain themes that he dealt with. They ranged from women to famine, and playful relationships of the mother and child. He was very inclusive, both in his theme as well as in the way he dealt with them in terms of the form… His work was very open-ended, and in a sense his own crossing over multiple isms of modernism… was something I could empathetically relate to and rework.

Sets were made on each of these spaces based on these works. Santanu Bose directed the performance in these spaces. All of those twelve spaces — which finally had thirty characters – had performances happening at the same time… This title –“409” is just to signal that it is something contemporary.

…The audience enters and walks around, comes to the studio space, and goes to where these performances are taking place. They enter from two sides. It was like a mela… There was an intentional chaotic anarchy… It’s all in fragments. It is like a table of contents and this is the range of issues that Ramkinkar dealt with. Each form was different and the actors ranged from a solo person to up to three to five women in one space. This set the tone for a different kind of theatrical experience, and what would be a part of immersive theatre, because in each of these spaces one had to walk around; there was a central isle and one could go around and in and out of it. 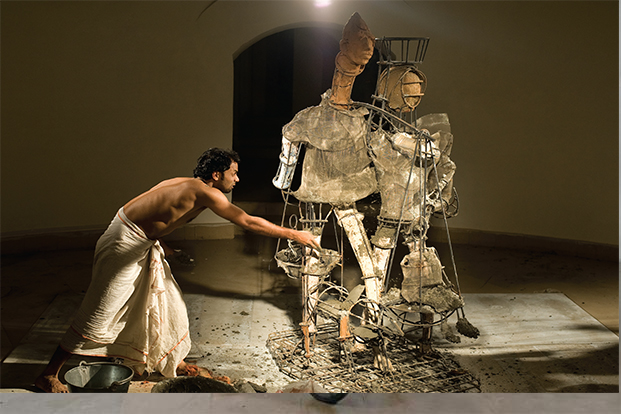 There is an amusing story: Ramkinkar had decided that the two workers [in “Mill Call”] are going to be women — whereas “Santhal Family” has a man, woman, children and a dog — and both are striding forward. He did them outdoors, and made an armature of bamboo initially. This fell down, following which he made a metal one. Then, like an action painting, he would throw the cement which would stick, and slightly model it. There was a very performative aspect to this. He would also work in the night and have a light. One night Nandalal Bose turned up, and he looked at it and said, “Why are you making both of them look in front? Why don’t you turn one of them to look back?” It would then have a different posture, and Ramkinkar immediately realised that it was too simplistic to make them just look ahead, in one direction. He then broke the head and turned the body around.

“Mill Call” was made in 1956 and the [backdrop of the] peasant uprising was already a part of the working class. The title “Mill Call” suggests that the tribal has gone to the factory for work. They are not used to the siren and they run. Movement, Ramkinkar said, was something absolutely central to his aesthetic agenda, and he brought in movement wherever he could. Even in the “Santhal Family”, which was done in 1937, the gate is a very gentle one and the tribal is in a semi-dance pose, with a particular lightness, and there is a whole family. The sense of gate and speed is very different from “Mill Call” where they are literally rushing and running for work. …Taking the cue from his interest in movement, one of the things with velocity and movement in the modern world is the motor car, so everything here (in “Mill Recall”) is made of motor car parts. …There is an open-air theatre on one side and people come out when they hear a siren… It starts moving towards the open-air theatre with people following it. Then it enters the stage and makes an exit. It is being used as a prop, signalling the aspect of the “found object” and the “ready-made”. When the play ends, it again returns and exits. So the sculpture was used as a prop.

“An older artist can inspire a leap into the unknown”

The other remarkable thing, about which very little is known, is about the art historian Stella Kramrisch, who actually became very well known for engaging with traditional Indian sculpture. Tagore seems to have met her somewhere and he invited her. She was also quite engaged in modern contemporary art. So in 1923, she came and spent almost six to eight months, speaking about Dadaism and Surrealism. And Ramkinkar always said, “I only heard about these lectures; I was never there.” But he was the one who took the spirit of the most avant-garde modernism at that time, into his body, soul and mind… Nandalal Bose told Ramkinkar that “If you want to really develop as an artist, you have to read, go to the library and even learn English; only then will you grow.” He became a voracious reader and because of Tagore’s influence, books on modern art were already in the library… People say that modern art came later on — whether it’s Amrita Sher-Gil or the Bombay Progressives — but this aspect has been hugely undermined. That part was very important for me — to link to this moment of change and break in Ramkinkar’s work.

…Tagore leapt completely as a self-taught artist into modernism, and he was already familiar with European modernism — he had visited places and seen Expressionist works. He propagated that, and he found Ramkinkar doing this kind of work — he saw the sculpture “Sujata” and asked, “Who has done this?” and then said “Make more, fill the whole place! Do you know in the West they have these confident and monumental sculptures?” Tagore was an international modernist and gave him that signal. That whole spirit and the rest of him — his multiple mediums, theatre and performance — completely influenced him.

The 1991 break in the Indian art world

In reflecting on my own practice and modern Indian art, a break took place as late as post- Independence art till 1990 — I would say almost ninety-seven percent was painting and sculpture. The word “avant-garde” was criticised by many people… and all of us were influenced by our living traditions. It took till 1991 for this “break”, which is when artists started using new medium and materials, bringing in photography, video and installation. It’s also a historical juncture with the collapse of the Soviet Union. In India itself, electronic media opens itself out, and capitalism starts entering… This “break” was a shift away from the art object as a commodity which circulates in the market, like traditional painting and sculpture. However, once you enter into installation art, the “found object”, and into things that are ephemeral, they certainly do not appear in auction houses. It is only later that galleries realised that they should, once in a while, support some aspect of installation art which won’t sell… There was a boom in the early 2000s in the price of everybody’s work. There was speculation about young artists whose works then would be sold for tens of thousands and lakhs of rupees. In one sense, it created a whole flank of Indian artists who could be called fulltime professional artists. Their skills and infrastructure greatly improved, and they could have assistance. The demand was so much that they were producing large amounts of work. On the one hand it was feeding a market, but it also gave them the liberty to do ambitious non-conformist works. The political climate post Babri Masjid, the riots in Bombay and the aggressive frontal attack of the BJP also deeply affected artists.

Installation art has very little written about in a complex way. There is a word which emerged from the radical movement in the 60s initiated by Italians called “Arte Povera”. It means “poor art” and was practised early on, since the Dadaists. The “idea” was foregrounded. Many collages, for instance, were made by things that were not going to necessarily last. It is the unit or element that can generate both a form and an idea, which is repositioned with the notion of skill, because art was largely seen as how you could draw or sculpt well. This was a “break” which did not come from Picasso, as generally thought, but from Duchamp because he critiqued the notion of skill. For instance, if an object was placed on a table as a work of art, then you would have to think about what made it a work of art. Installation art grew and developed only in the late 60s. It curiously came about when some well-known curator informally put up an exhibition. The idea of curating became a distinct category only in the 60s where you brought together different works of art. The curator would have an argument, would see something happening, and would want to bring this configuration to start a dialogue across disciplines, mediums, etc. The word “install”, suddenly became “installation” and then became “installation art”. Initially there were singular objects but installation art meant that it became spatial. It then took on architecture; sculpture went off the pedestal and came to the floor. So it is humble, formal, minimal, ephemeral, coming from the “Arte Povera”, on the one hand, and then you can get to spectacular scales.

…Site specific installation means it has to be destroyed. The destruction of the work then exists only as a document… The translation into text, into critiquing and theorising it, is also a repositioning or a renewed understanding of what installation is both historically – in India – and in its theorising in the West… This understanding of something that has taken place sometime ago, and how it articulates itself today, is bringing the politics of art in a richer and complex way.

Listen to the full conversation: