India Goes to Palestine with Murals

Highly acclaimed artist Orijit Sen toured with the Jana Natya Manch (Janam) in Palestine, as part of the Freedom Bus. The Freedom Bus involves a journey in which students, artists and activists from across Palestine and elsewhere join residents in some of the key sites of oppression and resistance in occupied Palestine. This year, the tour began in Jenin on March 18 and ended in Hebron on March 30.

Earlier, in 2015, the Freedom Theatre came to India and rehearsed at Studio Safdar for six months. We spoke to Sudhanva Deshpande and Faisal Abu Alhayjaa as they were rehearsing for their play “Hamesha Samida” (Forever Steadfast) – the outcome of the first theatre collaboration between Palestine and India. Deshpande had also travelled to Palestine earlier in 2015 and recorded his experiences in a diary. “Hamesha Samida” travelled to 10 cities in India in December 2015 and January 2016. 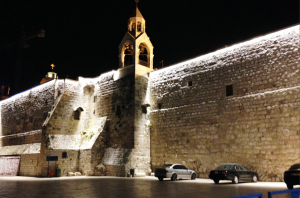 In Hebron, Sen saw buildings where the terraces or top floors have been occupied by the Israelis. These houses have staircases leading up to the windows of Palestinian floors, because they don’t have access to what should be the common staircase of the building. Details like this make up the context for the everyday resistance of Palestinians, as well as the guiding slogan, “To resist is to exist”.

Sen also explains the several murals he made in Palestine. He speaks of the process, peppered with funny anecdotes – from children ruining the murals sometimes to helping sometimes, to a Bengali insisting that there should be something in the Bangla script in the mural.