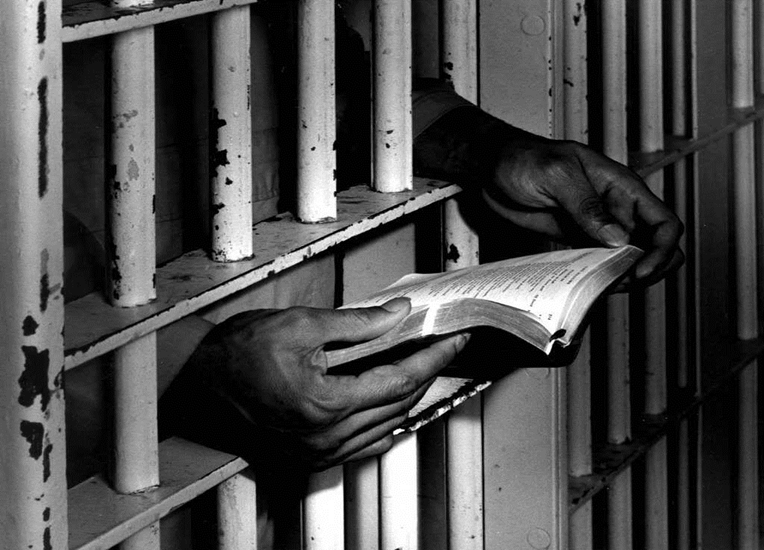 Death had always haunted
my peace of mind,
turned turbid my sleep and dream,
surviving torture was beyond me.
Yet now, when I look ahead
through the rusty bars of this prison,
through the branches of the tree
spreading its shade on the courtyard,
and discover the scattered shreds
of the purple evening sky,
I recall with a start the news
I read yesterday: those two men
on the gallows challenging death
miles away on the banks of Krishna
give me a tremor.
A saying etched long ago
on my mind’s black stone
restores my peace of mind:
“Death courted for the people is
heavier than the Thai Mountains.”

The waves of Krishna opening
the copper plates of memory
may be covering their eyes
watching Telengana’s tragic turn.
Sure, they will now scream aloud
to convey their last message.

On my mind’s dry shore
the memory of River Bavali
lies writhing: the fire of the two eyes
plucked out in the valley of Brahamagiri,
the bleeding nails of the severed hand:
they will pierce the Red Fort like daggers
and be reborn as raging flames
above the wasteland’s wrinkled dreams.
Today it dangles like a sword of death
from the palace top, echoes as the
music of ruin in the ears of the guards,
retrieves tempests from the
depths of the earth.

The People of My Village

We pass between your swinging hands
in the rhythm of a marching song.
Iron fetters decorate our hands.
Khaki eyes carrying rifles on either side.

Yet we see in your eyes
the quiet before the storm.

Seated on the jewelled throne
studded with the pearls from New York
and the diamonds from Kremlin,
under the shady trees planted by native kings,
they try us with guns and tanks
in the name of ahimsa.
Then they ask us to sleep
listening to the thousand and one tales
from the Arabian Nights.

But your eyes are marked by sleeplessness
and your armed thoughts travel
from ears to ears like guerrilla fighters.

We pass between your swinging arms
with the tumult of a procession
announcing war.

About Our Little Sister

The chill wind, sharp like the needles
pushed into the nails of the thief
in the lock­up.
It sobs gently like the love song whistling in
the oak trees in harsh nights.
She felt nothing, her naked body like
the senseless corpse of a counter­attack.
Death smiles from the raped lips.
I too mourn silently with her brothers
who work in mines and fields.
Our little sister had fought against
the authority, grown obese, rotten.
“Thousand scapegoats and one wolf”:
that’s the game today.
Her blood, her naked blood,
floods the streets.
Her dead body dragged along the road
goes on growing beyond the streets.
It spreads the foul smell of fear
in the seats of power.

You shameless guys opening your mouths
only to hurl abuses, you who made love to
language when she had contracted syphilis,
don’t try to speak for the whole world!
Don’t universalise that tragic angst
and those fears of war and death!
You have had your day
and you were then with history;
today when history has ousted you,
just howl and fidget for a while
and leave the scene!
You have that stick that you always carry,
that usage, “We”: forget it!
And even if you won’t, we know,
there is no “ours”, it is only “mine” and “yours”
Now we have the upper hand in history,
the initiative is ours and the tragic sense yours.
Didn’t you hear one of your Jewish friends say,
“This choking twilight we have to decide
Not what we should do,
Not how we should live
(we cannot decide all that now:
we had decided long ago what to do),
but what is the life with the least painful dreams
available to us in the coming nights.”
Yes, try something like that.
Still with so much of power and so many bombs,
you are the helpless and anguished ones!
You say you are now in the choking twilight:
then take it from us.
We are in the rising golden dawn.

The day’s feathers are falling.
The guards have arrived for their night duty.
The whirlwind starts abruptly,
no one knows from where:
could well be from under the earth itself.
The sky’s udders look full.
“It’ll rain today,” says someone,
“this year’s first rain, the new rain.”
But it’s the chill wind
that comes screaming.
It must be raining somewhere, for sure.
The night arrives in a hurry.
Electric lights open their eyes outside.
Light peeps in, reluctant.
Now we cannot see the sky,
but can hear the thunder.
We lean on the iron bars and listen:
yes, it will rain today.
As we watch, comes a drizzle.
It rains pitter­patter.
The rain is getting stronger with
the power of the moist earth.
If only they would open the cells,
we would have bathed in this rain,
rolled over the wet earth.
But we are in prison:
we just stand holding the bars.

It’s still raining.
Suddenly a tree falls down.
The wind has broken its chains.
Lights are out: streetlights
must have gone out too,
and all those wayside lanterns.

It must be raining heavily outside:
The city’s drains must be overflowing.
It’s a deluge: the rain is getting mightier,
we can’t see anything.
The guards are shouting:
they don’t have raincoats.
The lanterns they swing too have gone out.
Everything is drowned in darkness, everything.
Only the scream of the rain
and the roar of the wind.
Some things are flying: are they
the tiles of the prison roof?
Don’t know, don’t.

It’s a deluge. The rain is pouring.
It was the flood of Ninety­nine that had
carried away my grandpa.
My grandpa was a saint in loin cloth
who had reined in his senses
taking only raisins and cream of milk.
It is he who is standing in front of the prison,
his bent body supported by a walking­ stick.
It was sculpted long ago by a prisoner
sentenced to death. He was sent to the gallows
before he could complete it.
It was someone else who completed it.
Holding the bars of the jail, we wonder:
Has the old man fallen,
to be carried away by the deluge?

All the poems have been translated from Thadavarakkavithakal (Prison Poems), originally published in 1977, and republished with extensive notes and memoirs in 2010. The anthology includes 25 poems by ten poets. These are only samples. They are marked by certain recurring symbols such as the storm and the rain, and most have a rather loose structure. Many of these poets began to write poetry while in prison; some stopped after coming out, and others continued. Muhammad Ali and P. Udayabhanu are no more. Others are still  active as writers, theoreticians, editors and activists. They have moved away from the Maoist  ideology that stirred them in the 1970s, but their social commitment remains intact.