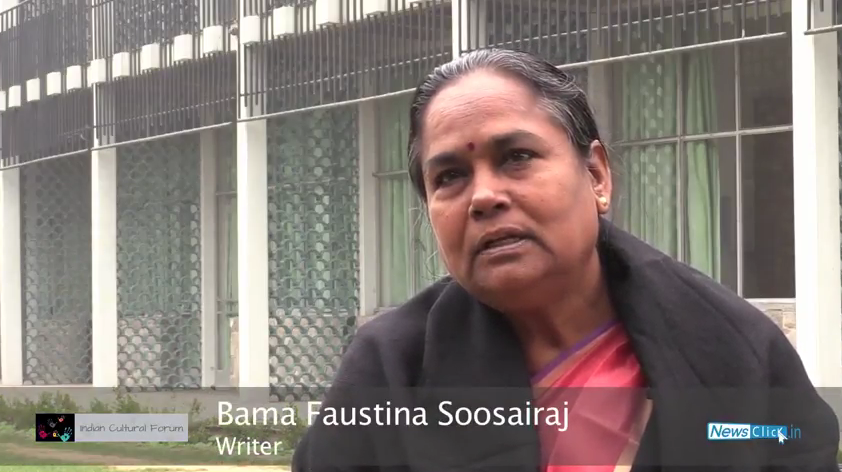 On January 20, 2016, Tamil writer Bama Faustina Soosairaj, or Bama, as she is popularly known, was part of a panel discussion on caste, religion and lived culture at Ambedkar University Delhi. The occasion marked the launch of the second issue of Guftugu. The following edited excerpts are from Bama’s responses to a range of issues. Read with her path-breaking autobiography Karukku, it is clear that little has changed for Dalits since 1992 when the book was published.

“Dalits are born and brought up with the sky, water, fire, air, earth – the pancha mahabhutas, the five elements. Every day they touch the bhumi – the soil – as they work.  And most Dalits live in the open. Some of those who have small huts may not even have doors. In villages, they sleep on the streets even today. Sleeping on the street, looking at the sky and the stars and the moon, really lightens their day’s hardship and burdens. They almost become one with the air and the sky.  So that is the kind of life they have in villages even today…”

At dawn and at dusk, the eastern and western skies are splendid to see. When we used to go out in the early morning to relieve ourselves, a bright red sun, huge and round, would wake up in the east and climb into the sky. It would make its way, peering between the trees, glowing, its light spilling and sparkling. And in the same way, at evening time, when it went and dropped through the mountains, all the fields roundabout would be luminous with a yellow light. A cool southern breeze would blow through the fields. The crops glowing, swaying in the breeze, filled the heart with delight. To look at the light in the western sky was like looking upon a revelation of God. And at that very moment herons and crows and all other birds would wing their way home to their nests.1

“Then there’s water. Although they live in villages and work for everybody, Dalits produce food for everybody. To collect water for themselves they have to walk kilometres and kilometres.  So it is an ironical thing: they produce everything but they don’t have anything. They work hard for the rest of humanity and they are left to starve. There is scarcity of water. They don’t have enough nutritious food.  This is the passage of life for Dalits.  This is the life, the way of life we have, at least in the villages…

“Their basic knowledge about agriculture – the soil, climate, growing crops, and animals – is the only knowledge Dalits have. This traditional knowledge is not respected and acknowledged. They are skilled labourers. They know when the rain will come, when the wind will come, what crop should be sown in what season, at what time, and how long it will take to sprout. They have all this practical wisdom, but nobody respects that.  So now they are landless and they have no work. They have been scattered to different cities, to urban areas, where they live without proper shelter or in slums, and go without proper food. The Dalit community is now scattered in cities because of globalisation. Globalisation has brought much harm to Dalits. In the name of privatisation and free economy, fertile lands have been changed into real estate, or into land for horticultural crops. So there has been a lot of change.

“As a result, all that traditional knowledge is being forgotten, and also the oneness with nature, the art forms, the performances, the folk tales and songs, and the stories. Dalits have a lot of knowledge, but as they are excluded from society, they don’t consider whatever they have to be precious. And now we are losing this knowledge. We are talking of ecology and global warming these days. Definitely, there are changes in the climate, but why? If we really love this earth, we have to go back to the life of these farmers, the agricultural labourers, all of whom are invariably Dalits.  And this knowledge is not imparted through education, in our schools and universities. I have one thing to say: now, our schools, our colleges, our universities, they don’t produce real human beings with emotions and a heart. They are producing machines:  machines to fit into different companies for earning money, either in India or abroad.  So there is no human touch in the knowledge, or whatever is given to the younger generation.”

How long will they deceive us, as if we are innocent children, with their Pusai and their Holy Communion, their rosary and their novena? Children, growing up, will no longer listen to everything they are told, open mouthed, nodding their heads. Dalits have begun to realize the truth. They have realised that they have been maintained as the stone steps that others have trodden on as they raised themselves up. They have become aware that they have been made slaves in the name of God, the Pusai and the Church. They have experienced a state of affairs where, in the name of serving the poor, these others have risen in power while actually treading on the poor. Dalits have learnt that these others have never respected them as human beings, but bent the religion to their benefit, to maintain their own falsehoods.

But Dalits have also understood that God is not like this, has not spoken like this. They have become aware that they too were created in the likeness of God. There is a new strength within them, urging them to reclaim that likeness which has been so far repressed, ruined, obliterated; and to begin to live again with honour, self-respect and with a love towards all humankind. To my mind, this alone is true devotion.2

“Education is supposed to be an agent for social change, but what happens?  Caste discrimination is very, very aggressively practised in universities and colleges and schools, rather than in villages.  In my village, if anybody calls me by my name or my caste name, or if anybody degrades me now, I will give it back.  But here, in the universities and colleges and schools, caste is practised in a very subtle, satirical way. Whenever I have gone to different universities and given lectures, there is invariably be one question about reservations.  Everywhere.  So much so that lately, in one of the colleges, a very famous college in Chennai, I said, Please stop asking that question.  I was fed up.  Because people think Dalits are buddhus, they don’t have anything in their heads, they are not intelligent people. They have come up in life only through reservations. Yesterday I was talking to someone. He was talking about Rohith, and was indirectly telling me, “This PhD, this higher thing, they need to work hard and achieve through hard labour. Research work – it needs merit you know.”  So this is the mindset people have – Dalits are not capable of doing research, or capable of getting a doctorate degree.

“The same thing happens in schools. Even in a primary school, the teacher says “Oh, a Dalit – you won’t be able to do this.”  I’ll give you a concrete example: one additional education officer visited a classroom from our fifth class. He asked one of the boys to stand up and read Tamil – his mother tongue.  He was not able to read properly.  So he scolded the headmaster, “Why is this boy not able to read even Tamil – the mother tongue?  English, I can understand, but why isn’t he able to read Tamil?”  And the headmaster told him, “He is an SC, sir, he can’t read.”  If the headmaster has this in his mind, how will he teach that boy? This is how Dalits are excluded. I have personally seen this condition. In Tamilnadu, whether you read or write, everyone is promoted up to the 10th standard.  Then, in the 10th standard, students have to appear for the government exam. They fail and drop out. Then they go do some menial job in their village.

“This is the condition. From the beginning, Dalit children are rejected. And the system of education we have is so rigid and so inhuman that it doesn’t allow children to show their creativity or their originality.  This continues in higher school, and colleges and universities also.  Competition.  Getting good marks.  Good marks, so that you can earn a four-digit, five-digit, six-digit salary, and become well settled in life.  That’s it.  Then competition.  We don’t have that sensitivity to the other person.  I’m not talking only about caste.  There is also gender exclusion. That’s what has been happening in different places.

“So what is the role of education?  If education could really liberate us, Rohith would not have died.  Eight persons committed suicide in the same university.  Where were we then?  How can we call ourselves educated people?  I’m really fed up, I really hate this system of education which produces machines to suit corporate companies. Without the human touch, what is the use of education?  So instead of liberating us, the education we impart now is again enslaving us.  That is the condition we are in. Now we all feel that Rohith has gone.  I saw a poster outside. It said “We are more than five”.  Yes, we are more than five.  But for what?  It should not be this momentary sensational issue. We are more than five to create equal chances for everybody, and create a society where everybody matters as persons, not as commodities.

I have met several people who work with zeal for the single objective of Dalit liberation. And it has been a great joy to see Dalits aiming to live with self respect, proclaiming aloud, “Dalit endru sollada; talai nimirndu nillada: Say you are a Dalit; lift up your head and stand tall.”3

For more from Bama on the Indian Cultural Forum site, click  here.