T.M. Krishna and the Jogappas

Coming Together to Sing an Equal Music 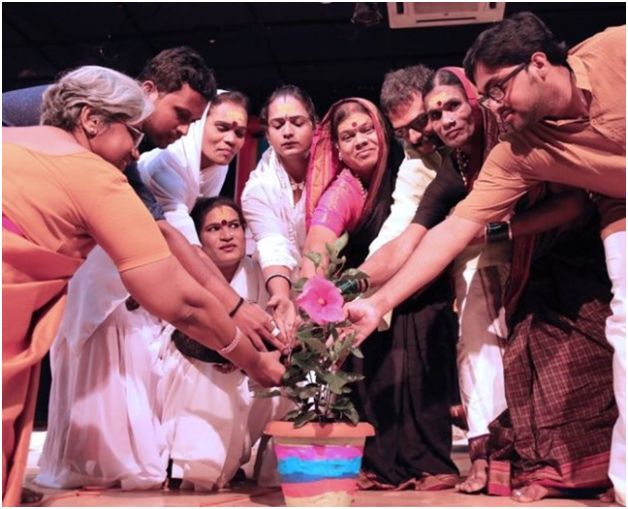 On February 21, 2016, a landmark concert in Bangalore brought together acclaimed Carnatic musician T.M. Krishna with five Jogappas, members of a traditional community of transwomen musicians. The event, called Aikya, or Coming Together, was organized by the Bangalore-based Solidarity Foundation which supports the rights of transgenders.

The Jogappas, a transgender subculture in North Karnataka, parts of Andhra Pradesh and Maharashtra, make a living by Joga (begging), singing and dancing. Dedicated to the goddess Yellamma (Renuka), they are

…‘caught’, possessed, by the goddess Yellamma: as such, they are regarded as holy women, and their gender identity and expression reflects this. Jogappas occupy a respected, priestly position within society: people seek their blessings, and appease Yellamma through them. They are a direct link between society and the divine. However, owing to their identity and gender expression, they also transgress the binary norms of gender and sexuality held sacrosanct by societies everywhere in India. They face the paradox of being seen as ‘powerful and holy’ as well as ‘strange and deviant’.1

The Jogappas often clarify that they are not hijras since their transgender identity is strongly rooted in their devotion to Yellamma Devi. They usually perform at the main temple of Yellamma Devi in Saundatti, or in villages where they go from house to house singing bhajans. Jogappas use three instruments to accompany their music: the choudki, a rhythmic instrument played using a small piece of wood on the inner side (frame) of an open wooden drum; the sutti, an instrument like the ektara, used to maintain pitch; and the tiny cymbals called taal.

Five Jogappas were selected to perform at the concert with T.M. Krishna. Singers Rakhi and Sagar Bhaskar Walke (the latter a Mahar), were accompanied by their teacher, Laxman Nivrutti Bhosale, also known as Laxman Guru. All three are Marathi speakers from Nipani. The other two, Siddappa G. Algonda and Davalsaab, are Kannada speakers from Vijayapura.

Performing with a Carnatic musician, and that too for an invited audience in an auditorium in a large city, was a new experience for these Jogappas. Equally new was the experience for T.M. Krishna, who is not only a respected musician, but also the author of the award-winning A Southern Music: The Karnatic Story. But Krishna found, when the event was in the planning stage, that “What they sing is very similar to the bhajan/namasankirtana tradition. They have one melodic line, and there is repetition of that melodic line and that’s the chorus. If you take any music, such as qawwali or gospel music, there is this idea that a similar tune must be repeated, mainly because they want the congregation to follow it. When I heard the Jogappas, I realized it was very much doable. Certain melodies of the Jogappas’ music are also similar to the Carnatic tradition. Each has its own aesthetic form and intent but there were melodic and rhythmic possibilities.”2

The result was a very new kind of musical conversation. Coming together on a common platform led to many levels of “aikya”. The songs included original compositions by the Jogappas of Nipani and Vijayapura in praise of Yellamma, interspersed with Carnatic music. Genres came closer together as Carnatic music and folk melodies sat side by side; Marathi, Kannada, Tamil, Hindi and English came together in song and speech like a miniature portrait of multi-lingual India. Most of all, the conversation raised the powerful question of equality in music practice.

This song, composed in Marathi by Laxman Nivrutti Bhosale, and filled with devotion for Renuka Devi at Saundatti, is performed by Laxman Guru of Nipani with a vocal mélange by T.M. Krishna.

The concert came to an end with T.M. Krishna’s rendition of “Allāh Térō Nām”, written by Sahir Ludhianvi and composed by Jaidev for the film Hum Dono (1961). The song was originally sung by Lata Mangeshkar.

The concert, called Aikya, was organized by the Solidarity Foundation, Bangalore.