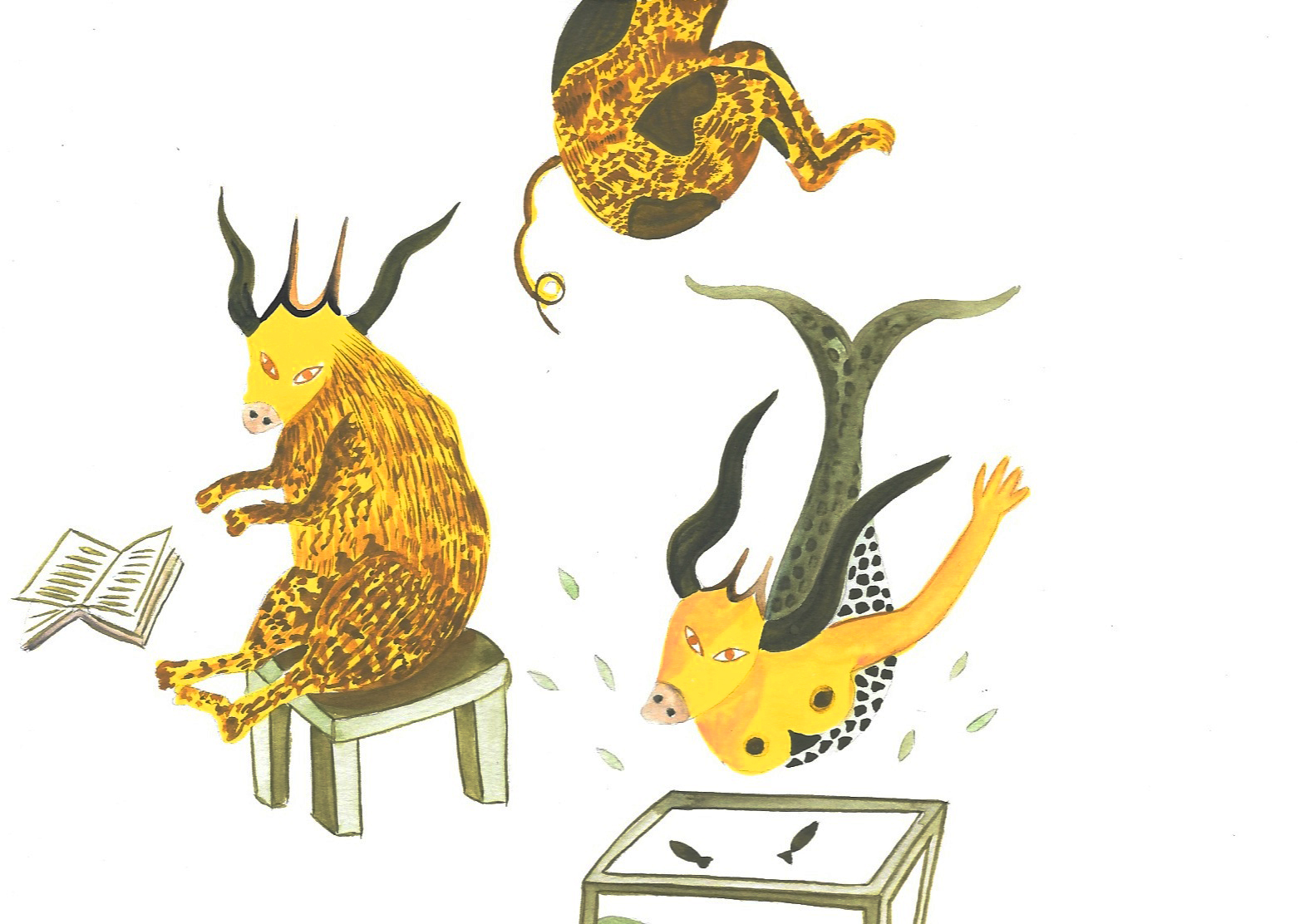 Shoili Kanungo, “Give us a Break”

For Asif Farrukhi and other friends of Sabeen Mahmud, assassinated on April 25, 2015.

Bodhisattva: In one of my incarnations, I was born as a simple, ordinary woman in the city K across the border.

Disciples: (amazed and amused) The Bodhisattva has never been a woman so far.

Bodhisattva: (with an enigmatic smile) Let me assure you that the next one to achieve Buddhahood will be a woman.

Disciples: (still puzzled by the radical nature of the proposition) The women who have only recently been admitted into our schools, and students and teachers will be pleased to hear that.

Bodhisattva: In daily life, ordinary women have often achieved the state of a Bodhisattva. But our social conditioning and cultural prejudices have prevented us from recognizing them.

Disciples: Did you say you were born as a woman, and that too in a home across the border?

Bodhisattva: Yes. Her parents left when the country of their birth was torn apart by religious and sectarian strife. But K, where they lived, was a strange city. Everyone there seemed to pray in such a way that everyone else knew about it. Yet no one had faith. Brutal gangs and sectarian priests had their own zones of influence and were more violent than our nightmares.

Disciples: (sadly) We too are exiles. We had to leave our homes in another country, but didn’t find a home in the new one. Even today, under this tree and in this ashram, our dreams are torn apart by gunfire. The life of all migrants was difficult. Some spoke the wrong language, some came from the wrong region, some followed the wrong prophet. It was as if each one of us was the mistake of some god or the other.

Bodhisattva: (sadly) The madness we see imitates the madness of the past.

Disciples: Life became worse than what we could have imagined. We were afraid of going to the market, playing in the park with friends, walking to the tap at the other end of the street to fetch water. So immediately after the civil war, we moved again and came here.

Bodhisattva: (sadly) The days of darkness always seem to return. That’s why someone assumes the role of Bodhisattva in each generation. To give hope. To encourage people to carry on. To resist.

Disciples: No one knew when a bullet would tear apart your body, or a fanatic crazed by visions of some surreal paradise would abduct a woman, or sell children into one of the countless slave markets.

Those days in K were particularly heartless. Urged on by pathological preachers and cultural lunatics of all sorts, many tried to erase every sign of hope and peace. Some chopped down mango groves, others blasted Buddha statues carved in mountain faces, yet others whipped and mutilated people as they did cattle or goats… But you know the Bodhisattva can even be an amaltas tree that suddenly blossoms into a profusion of yellow flowers when the land is barren and the sun burns. Or the Bodhisattva can be as unnoticed as the morning sunlight which seeps down to the forest floor after a long, dark and moonless night. It makes one wonder why there is no permanent peace, doesn’t it?

Disciples: Didn’t the city of K have a retreat like this one where people could talk, share their hopes?

Disciples: Did no one help?

Bodhisattva: Like the amaltas tree, the most unexpected person acquires the spirit of a Bodhisattva in times of turbulence.

Disciples: You said that you were once born as a young woman in K. Did someone recognize you as the Bodhisattva? Were you heroic? With all the violence in K, did you pick up a gun?

Bodhisattva: Sometimes, and very very rarely, it may be necessary to be a revolutionary leader, but only if there is no other option. That can be dangerous. Violence always leaves the heart in cinders and, as we all know, even the most peaceful form of civil strife can be co-opted by hooligans. And, of course, every time the Bodhisattva is born, Devadutta appears like his shadow. But some day we must talk about women like Simone Weil, Akhmatova and Dorothy Day who thought hard about what it means to be a Bodhisattva in extremely violent times.

Disciples: In cruel cities there are no banyan trees left. Maybe it is time for the Bodhisattva to be incarnated as a banyan tree before they become extinct. In which case, the Bodhisattva will also have to be born as a koel to negotiate peace between the parrot and the mynah – as the kissas tell us (everyone laughs).

Bodhisattva: Let me tell you the story of the time I was born as a woman. At that time women were subjected to atrocities in the name of religion and culture. I decided that since the people of K love to talk over cups of tea, I’d open a small café with the little money my mother had given me. I named it “Tea for Today Café”.

Disciples: That was an odd choice. Why a café? And why tea?

Bodhisattva: K has an old tea-house culture. Writers go there to discuss their work, students go to talk, young lovers to dream, and many to voice their discontent. The café was so popular that its regular visitors called it “TFT”. Oh, I should add that in those days women neither frequented tea-houses nor participated freely in literary and cultural gatherings.

Disciples: That couldn’t have pleased the gangsters and their priests! In violent cities there is no place for writers, lovers, and debates of any sort.

Bodhisattva: Those in power want subservience. And people are willing to bow before guns, hoping they will be left in peace. They never are. The gangsters collect protection money, the politicians appoint policemen, and the priests promise gifts in paradise.

Disciples: How long did the Tea for Today Café last?

Bodhisattva: (sadly) Oh, it’s still open. At first my mother looked after it, now it’s looked after by a group of concerned citizens. You can go there to discuss the Buddhacharita or the epic by Shantideva which is a favourite of the present Dalai Lama. One summer, when the violence was really brutal, I gave the space in TFT for a meeting of those who wanted to discuss terms of peace in a poor region where land was being grabbed by the usual groups – politicians, well-heeled smugglers, drug dealers and their armed guardians. The gun-runners and the preachers were unhappy with the idea of a negotiated peace. Well, they always are.

Disciples: Did you know how it would end?

Bodhisattva: A few weeks before that meeting, a well-known writer gave a talk at TFT about the Jataka tales. He said that in most of the Jatakas, the Bodhisattva dies, or is killed trying to help those in distress. The Bodhisattva’s death is, of course, not a sacrifice – that is now a contaminated word and is uttered with contemptuous ease. The Bodhisattva merely comes in the way of deliberate evil to ensure the survival of those who are powerless but good. I did not know how or when the end would come.

Disciples: But the end did come? Tell us.

Bodhisattva: When the peace meeting was on, I first heard the strange restlessness of birds in the trees before I caught the faint rumble of motorcycles in the distance. Intuitively, I knew what was going to happen; or maybe I had learnt to read the language of birds. I told my mother. Agitated, she warned the organisers, who began to leave by the back door. But the gangsters were already on the steps and I was afraid of a massacre. So my mother and I went out, locked the café doors and walked down the steps. We stood at the entrance, determined not to let the gangsters go upstairs immediately.

Disciples: Surely the gangsters must have hesitated to hit two unarmed women?

Bodhisattva: (laughs) In days of violence, no one has delicate manners. The gangsters wore helmets with visors, wide pyjamas two inches above their ankles, black headbands and loose black kurtas. They had beards which had been carefully dyed red with henna. I thought I was in one of the folktales I used to hear when I was a child. But in those folktales, the unarmed and helpless usually recall some mantra which saves them and defeats the monster.

Disciples: Did you manage to save the people upstairs?

Bodhisattva: Yes. My mother and I stood before the gangsters. They hesitated. Asked us to move aside. But then they recognised me and opened fire. My mother was badly injured. Their bullets killed me instantly. But TFT is still open. More and more people now go there to read their stories or poems, to voice their dissent, to hold hands, to dream…