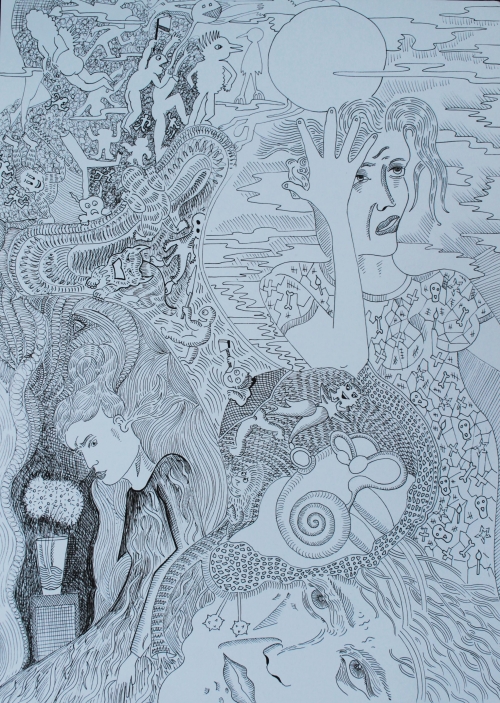 L as in Labeling

There are freedoms only a crumpled brown paper bag
That once cradled a Manhattan sashimi in its folds,
Now stuck in the middle of I 294, would know.
Freedom to glide and scrape by cars, without fear
Of being an upturned fable. That’s what she came to enjoy the most
As the newest inhabitant of this pristine space.
Vijayan, a vague synesthete, a writer of sorts, arrived here
Prior to her, his feet dripping with all the salty liquid
Of redemption, of used substance. Who better to work on translating
Khasakkinte Ithihasam, he winced piously.
He wasn’t being an idle provocateur. Seriously?
That sounded a bit con-mannish even to me.
Who the fuck still lived in the old world? She nodded
As if it was old news to her. Being agreeable was a virtue
She’d carried forth. Her brothers, she met them here too.
They’d shed their loitering leanings and settled for
Elitist discernments towards à la carte movies
That played non-stop in the background as they
Chomped noisily on political science, other urgent topics
Somewhat like what she did on social media
When she was alive, her grey cells indistinguishable
From moss. They made coffee for her in the mornings
In a rustic coal set kettle while the mahogany chair on the porch
Creaked, crushing leaves. Bird droppings shared names
With siblings, unlike in the other world. Plethargic
Wasn’t their last name. I explained to her, that wasn’t the case.
That she was morbid and whole in this green planet, with me.
She didn’t hear or bother to listen, spread suntan lotion
On her tooth brush, scrubbed her teeth till they were brown.
And I said, “Do you realize what you just did? Look at your brown teeth.”
She smiled, “Silly, that’s an overdose of iron supplements.
I ain’t no nutmeg.” Another time, she smeared baba ghanoush
Over her hair and left a post-it for me with instructions to clean the pillowcase
In a mouthful of chicken broth. The psychotherapist listened to her patiently.
Only a lousy caregiver would leave assorted cans unlabeled.

“Truth is whatever darkness we choose to ignore.”
— J. D. McClatchy, “Descartes’ Dream”

I try my best to honour last words as a matter of upper-lipped propriety.
So “Keep it simple” would remain as meticulous as simple.
While scooping out eyeballs that once mocked my shapeless boobs,
Bimbo fluff head and elephantine ears that “stuck out like cross-hatched herrings,”
I made amply sure that the prior designate cranium,
Now rivaling inordinately moldy mayonnaise, didn’t rock
Out of place, into an insufferable lava. Mopping
Floors in the middle of work wasn’t my style anyways.
Sliding globs in its entirety, iris intact, staring (almost thinking)
At lack luster cognac, prism glass effect notwithstanding.
A Kollwitz sketch at the very best, an illusion at worst, the glimmer
Of browner iris floating, a sea grass before it’s engulfed by kelps.
Thirsty, gorgeous.
Her last word was harder to honour.
The permutations just didn’t add up. With “Biaatch,”
Monochromatic as “genuine originality”, the matrix
But a plethora of puzzles. And I don’t want to make a single mistake.
So her shriveled pith lies in frigidarium, iris incorrigibly cold.
Still mocking.