Translated from Malayalam by K. Satchidanandan 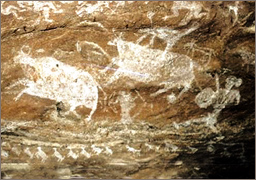 One day a little boy picked up a banana peel from a garbage bin on the road. While he was eating it, a cow snatched it from his hands. The boy felt sad; he pushed the beast away. The cow ran along the street, mooing aloud. Some mendicants suddenly turned up from nowhere.

“Did you hurt the holy cow?” they asked the boy.

“I didn’t. I only chased it away because it snatched the banana peel I was eating.”

“What is your religion?” asked the mendicants.

“Religion? What’s that?” asked the boy.

“Are you Hindu or Muslim? Or Christian? Do you go to the temple or to the mosque?”

“So you don’t believe in prayer?”

“I don’t go anywhere. I have no shirt. My trousers are torn at the back.”

The mendicants whispered among themselves, then turned to the boy.

“You must be Muslim. You hurt the cow.”

“Is that cow yours?” asked the boy.

The mendicants wrung the boy’s neck and threw him into the garbage bin.

Then they chanted together, “Om nama shivaya. Let thy holy name be praised.”