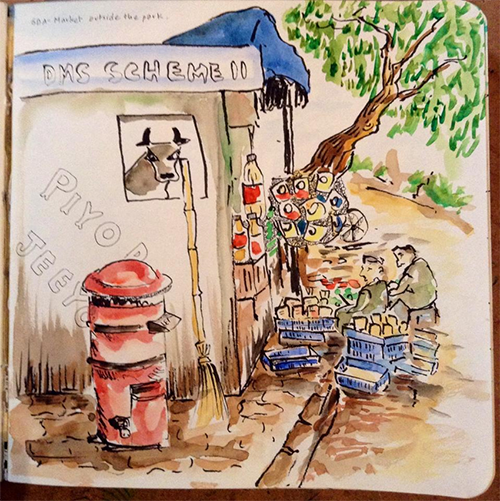 I
I have come drawn to water,
Rooks in trees preparing for winter,
A glazed horseshoe dropped a century ago,

Bits of arrowhead
From those who lived on this land,
Who thought the sun and moon beloved companions.
We were young,
Hair the color of crow feathers,
Mine spilling down, yours spiking skyward.

You had a shawl
Flung over your shoulders.
About you, the glamour of the very young poet.

We stood at a stall sipping tea.
A lorry painted with a four-armed goddess scratched to a halt.
The driver waved at us, strolled into the bushes.

Who is the greatest singer in the world?
Breathless, you picked up your own question –
Begum Akhtar. Who else? You must love her too.

My heart is given, I replied, to M. S. Subbalakshmi.
I will not take it back.
On the road where we stood it started to rain,

Under the neem roots
Earthworms wriggled.
I heard a supernal, fleshly music.

Shahid – the movie theatre where they showed Fire
Is burnt, rexine seats and all.
At the rim of Dal Lake, boats smoulder.

In your valley I see a girl, her feet so very clean,
Washed in a slipstream.
Her face pale, her kurta jonquil coloured

March birth flower,
For the month she died.
On her left breast, the marks of barbed wire.

You said you were at the last ghat of the world,
What did you mean?
A heron, feathers bloodshot, swims to the horizon.

Love is its own compulsion –
In dreams you become a black god,
Our splintered geographies of desire

Sucked into meteors,
Flaming round your head.
Now I hear your voice in the cherry trees

In the thud of lost arrowheads,
In the resolute clip clop of horses,
Manes blown into the sun.

You stroll through clouds: beside you chinars float,
Four of them, making a secret island.
By me, small boats rock, hulls singing.

Dear Mr. Gandhi
It was cold the day the masjid
was torn down stone by stone,
colder still at the heart of Delhi.

Can you describe this?
It sounded like a voice
from a city crusted with snow
to the far north of the Asian continent.

I saw him then, your grandson
in a rusty three-wheeler
wrapped up in what wools he could muster.
Behind him in red letters

a sign: Dr. Gandhi’s Clinic.
So he said, embracing me, you’ve come back.
Then pointing to the clinic –
It’s not that I’m sick

that gentleman gets my mail and I his.
That is why I am perched in this contraption.
I cannot stay long, it is Id ul Fitr
I must greet friends in Old Delhi, wish them well.

Later he sought me out in dreams.
in a high kitchen in sharp sunlight
dressed in a khadi kurta, baggy jeans,
he touched my throat in greeting.

Listen my sweet, for half of each year,
after the carriage was set on fire
after the Gujarat killings,
I disappear into darkness.

In our country there are two million dead
and more for whom no rites were said.
No land on earth can bear this.
Rivers are criss-crossed with blood.

All day I hear the scissor bird cry
cut cut cut cut cut
It is the bird Kalidasa heard
as he stood singing of buried love.

Now our boys and girls take
flight on rusty bicycles.
Will we be cured? I cried.
And he: We have no tryst with destiny.

My hands like yours are stained
with the juice of the pomegranate.
Please don’t ask for my address.
I am in and out of Bengali market.